A soft-wooded shrub, or almost a tree, sometimes 15 to 30 ft high, more usually about half as high; young wood covered with a white down. Leaves alternate, long-stalked, three- or five-lobed, maple-like, heart-shaped at the base; varying much in size according to the vigour and age of the plant, but usually between 4 and 6 in. long, three-fourths as wide; each lobe ends in a drawn-out point, and is coarsely and unevenly toothed; both surfaces (but especially the lower one) covered with greyish tufted hairs. Flowers borne, three or four together, towards the end of a woolly stalk, 3 to 5 in. long, springing from the leaf-axils; each flower measures 21⁄2 to 3 in. across, has five rounded petals of a beautiful pale, purplish blue, and is in form rather like the flower of a ‘single’ hollyhock. Bot. Mag., t. 4227.

The flowers vary in colour, and in one form, to which the name alba has been given, they are snow-white. This usually comes true from seed, but occasionally the purplish-flowered form appears amongst the seedlings, just as seeds of the purplish one will sometimes produce the white one. In the clone ‘Veronica Tennant’ the large flowers are pale lavender in colour.

Native of Chile; first raised in Dublin in 1836 by Capt. Cottingham, an amateur gardener of the time, who had obtained seeds from its native country. It is not hardy in the open at Kew and is even uncertain against a wall there, but in the milder parts of the country few shrubs are more lovely during summer when it is in bloom. It is not a long-lived plant, and, as is not uncommon with soft-wooded shrubs that flower and bear seed so profusely, it is apt to die suddenly without apparent cause. Happily, its abundant seeds give a quick and easy means of renewing the stock. It is most fortunately placed in some sheltered corner, such as in the angle of two walls, where it will develop into a loose, graceful shrub. It may also be grown on a wall, but in the milder parts of the country will stand on the open lawn.

A. ochsenii (Phil.) Phil. Anoda ochsenii Phil.; Corynabutilon ochsenii (Phil.) Kearney – This near ally of A. vitifolium was introduced c. 1957 from Chile by E. B. Anderson. The parent plant grew in the garden of the late Sra Margharita Manns and was collected by her in Valdivia province. It differs from A. vitifolium in its much less hairy stems, leaves and peduncles and its smaller, deeper-coloured flowers borne singly or in pairs. The greener leaves and violet-blue flowers render it very distinct from the older species. It is not yet fully tested in cultivation, but judging from its performance in the winters of 1961-3 it is as hardy or even hardier. It is certainly a vigorous grower, likely to reach a height of at least 12 ft on a wall. It is figured in Bot. Mag., n.s., t. 445. 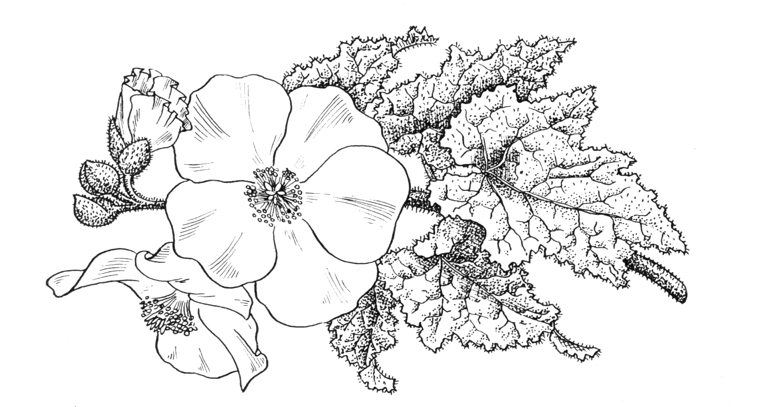