A deciduous shrub, probably 6 to 10 ft high, entirely devoid of down, sometimes unarmed, sometimes with small, slender, downward-pointing prickles at the joints. Leaves composed of three or five leaflets borne on a stalk 1 to 3 in. long; leaflets 2 to 4 in. long, 5⁄8 to 11⁄4 in. wide, lanceolate, slender-pointed, doubly toothed, tapering at the base to a stalk 1⁄8 to 3⁄8 in. long. Flowers produced in July in a terminal cluster of umbels, each umbel 11⁄2 to 2 in. across, spherical, borne on a stalk 2 to 4 in. long. Each flower is small, greenish, on a slender stalk 1⁄2 to 3⁄4 in. long. Fruits black, roundish oval, 1⁄4 in. long, crowded in umbels over 2 in. across. Bot. Mag., t. 8607.

Native of Central China; discovered by A. Henry; introduced by Wilson in 1901. This is one of the handsomest species in this genus; its habit is not so stiff as that of its near allies, and the large umbels of black fruit are effective. It has been confused with A. simonii (q.v.), but differs in being glabrous and in the arrangement and shape of the prickles; from A. henryi it differs in the same respects as well as in the toothing of the leaflets. The Chinese obtain a drug from the root.

var. scaberulus Harms & Rehd. – A deciduous bush 4 to 6 ft high; young shoots glabrous, usually unarmed except for some deflexed spines found occasionally at the joints. Leaves always composed of five leaflets, borne on a common stalk 11⁄2 to 31⁄2 in. long, which is either smooth or furnished with reflexed bristle-like spines. Leaflets oblanceolate to obovate, tapered at the base, slenderly pointed, doubly toothed; 11⁄2 to 21⁄2 in. long, 1⁄2 to 11⁄2 in. wide; upper surface rough to the touch with short stiff hairs; lower surface downy on the midrib and chief veins beneath. Flowers yellowish green, produced during July in globose umbels about 1 in. wide. Fruits black, globose to oval, 1⁄4 in. long.

Native of Hupeh and Szechwan, China; introduced for Messrs Veitch by Wilson in 1904 and again three years later for the Arnold Arboretum, Mass. From the glabrous type this variety differs in the smaller downy leaflets, in the often bristly leaf-stalks, and in the uniformly five-foliolate leaves. Another form in cultivation is:

var. fulvescens Harms & Rehd. – This has leaflets also downy beneath and rough above; but they are larger (up to 5 in. long by 21⁄4 in. wide), have no bristles on the leaf-stalks, the down beneath is yellowish, and, as in the type, the leaflets may be three to five to each leaf. 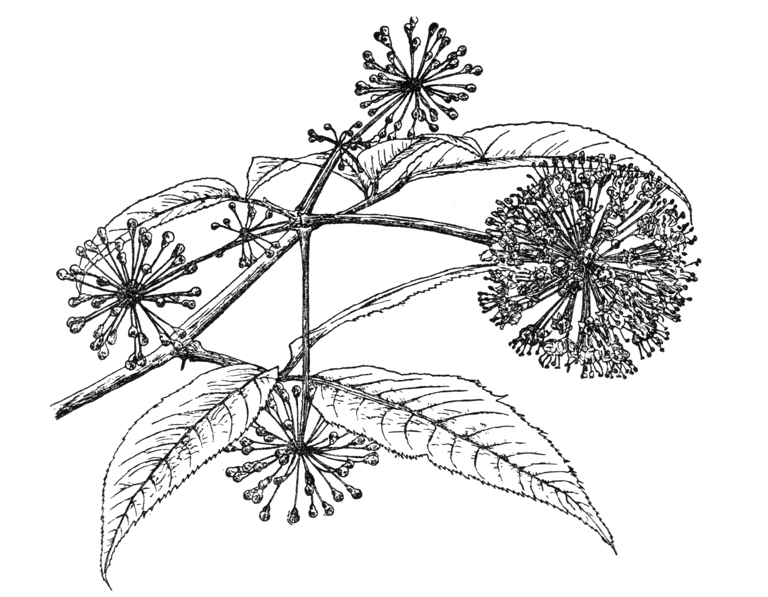