An evergreen tree reaching in its native state heights of 20 to 100 ft, with a trunk 1 to 6 ft in thickness; in Britain it has not yet exceeded 60 ft in height, and is usually 20 to 30 ft. Young shoots glabrous; bark peeling, and, on the older branches and trunk, leaving the wood perfectly clean, and of a striking cinnamon colour. Leaves oval, 2 to 6 in. long, 11⁄4 to 3 in. wide; toothed on young plants or very vigorous shoots, but mostly with entire margins; dark glossy green above, glaucous or almost white beneath; stalk 1⁄2 to 11⁄4 in. long. Flowers produced during May in a terminal pyramidal panicle, from 3 to 9 in. long and up to 6 in. wide; corolla pitcher-shaped, about 1⁄4 in. long, dull white; flower-stalks downy; calyx small, greenish; fruit about the size of a large pea, orange-coloured. Bot. Mag., n.s., t. 275.

Native of western N. America from British Columbia to the latitude of San Francisco; described from specimens collected by Menzies in 1792, when attached to Vancouver’s voyage of discovery; introduced by Douglas in 1827. This is one of the most beautiful of all broad-leaved trees, and as seen at its best in the moist rich valleys of N. California is by far the noblest of all the heath family. It is especially noticeable for the perfectly smooth red branches. The fruit is rather variable in colour: in a tree at East Bergholt Place, from which a fruiting spray is figured in the Botanical Magazine, it is bright crimson. In the milder parts of Britain, it succeeds very well, and at Kew is perfectly hardy, except that in a young state the vigorous sappy shoots are apt to be cut back in winter. An old specimen at Kew died recently, perhaps as a result of the hard winter of 1962-3, but generally the species survived that winter with little damage. It should be propagated by imported seed, which is obtainable from American nurserymen and germinates well, if fresh. The young plants should as soon as possible be given a permanent place, as they transplant badly.

W. L. Jepson says that in N. California no other tree makes so strong an appeal to man’s imagination as this, and that wherever it grows, ‘the traveller, forester, hunter, artist, and botanist is held by the spell of its crown of flowers and masses of red fruits, its terra-cotta bark and burnished foliage’. It is far too rarely seen in cultivation. When once established it grows quickly; a tree at Kew raised from seed was in thirty years 29 ft high, with a trunk 3 ft 7 in. in girth. 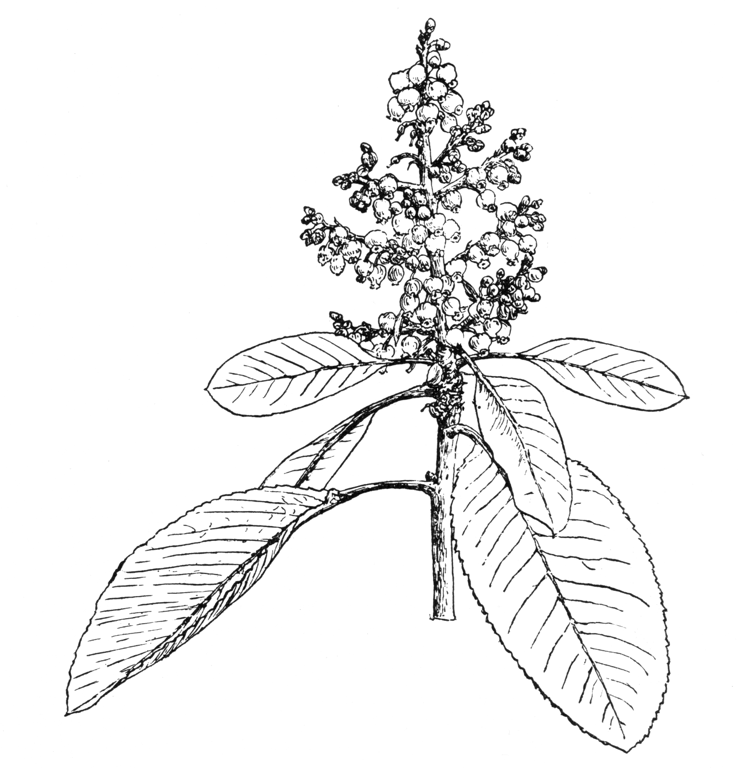 A. menziesii extends farther south than stated, being fairly abundant as far as San Luis Obispo County and with scattered stands even farther south. But it reaches its largest size in the redwood belt north of San Francisco.

Closely related to A. menziesii is A. texana Buckley, a small tree ranging from central Texas into New Mexico and south into Mexico (Nuevo Leon). The leaves are shorter than in A. menziesii, to about 3 in. long and half as wide, downy beneath, and the fruits redder than in that species. As yet there are no large plants in cultivation, but seeds were received by Kew in 1972 and there are young plants in the Castle Howard collection. A. texana is misleadingly given as a synonym of A. xalapensis by Standley in Trees and Shrubs of Mexico.

† A. xalapensis H.B.K. – This Mexican species was described in 1819 from the neighbourhood of Jalapa in Veracruz; how far it ranges to the north and west is not clear. It is quite closely allied to A. menziesii and, like it, makes a tree in the wild under favourable conditions, with the same reddish brown, peeling bark, though on the trunk, at least in the area where the type was collected, this becomes close and greyish black on old trees. It differs in its smaller and relatively narrower leaves, which are up to about 4 in. long, oblong to elliptic, sometimes ovate, more or less tomentose beneath when young, becoming almost glabrous at maturity. The ovary is downy (glabrous in A. menziesii) and the fruits dark red, about 3⁄8 in. wide.

A. xalapensis was introduced early in the 19th century. However, it was probably not grown in the open until reintroduced in 1938 by the late Edward Balls from near Perote, west of Jalapa. A plant from this sending in Sir Frederick Stern’s garden at Highdown near Worthing first flowered in 1955, but died early in the 1980s after ailing for many years. A. xalapensis was again reintroduced from the same area (under the Cofre de Perote, at about 8,000 ft) by J. Russell in 1984. Young plants from this seed survived the winter of 1986/7 at Castle Howard in Yorkshire, as too did those raised from J. Priest 97, collected in Coahuila at about 8,000 ft, and from Keith Rushforth 556, collected in Nuevo Leon from shrubby plants about 15 ft high.

A. xalapensis is a variable species, with a long tail of synonyms, probably to be joined by some other species now teetering on the brink of synonymy. A. glandulosa Mart. & Gal. of southern Mexico is distinct in having petioles with glandular hairs, though it has been questioned whether this is any more than a minor variant of A. xalapensis. Of greater interest is:

† A. arizonica (A. Gray) Sarg. A. xalapensis var. arizonica A. Gray – This was described from southern Arizona and extends into New Mexico, but its main distribution is in Mexico. In the USA this is very distinct from A. menziesii and A. texana in its lanceolate leaves up to 3 in. long and about 1 in. wide. It makes a tree to about 50 ft high, with a dense crown, the bark peeling on the branches but on the trunk becoming furrowed and ashen-grey. The ovary is glabrous (not downy as in A. xalapensis). The fruits are orange-red, about 3⁄8 in. wide.