A deciduous tree 20 to 30 ft high in this country; said to be occasionally twice as high in its native places, with a trunk 3 ft in thickness. With us it is of spreading habit, often a shrub; young shoots at first clothed with stellate down. Leaves ovate, ovate-oblong, or elliptic, acute or acuminate at the apex, wedge-shaped or rounded at the base, 2 to 5 in. long, minutely toothed, downy or glabrous above, covered beneath with grey stellate down, densely so in var. mollis (see below); stalk 1⁄4 to 2⁄3 in. long, downy. Flowers produced in May on slender, downy, pendulous stalks 1⁄2 to 1 in. long, in clusters of three to five from the joints of the naked, year-old wood. Corolla white, bell-shaped, 1⁄2 to 3⁄4 in. long and wide, shallowly four-lobed. Fruits somewhat pear-shaped, but with four prominent wings running lengthwise and an awl-shaped termination; altogether about 11⁄2 in. long. Bot. Mag., t. 910.

Native of the south-eastern United States; introduced by J. E. Ellis in 1756. It is undoubtedly one of the most beautiful flowering trees introduced to this country from N. America: yet it is by no means abundantly planted. There is a fine example at Kew on the north-west side of the Broad Walk, about 16 ft high and more than twice that in spread (1970).

A distinction is usually made between what is said to be the typical state of the species, in which the leaves are relatively narrow and their indumentum thin, and var. mollis (Lange) Perkins, in which the leaves are broader and the indumentum denser. According to Sargent, the two states occur together, with var. mollis predominating in Florida. The distinction is hardly worth making in gardens and the above description comprises both.

cv. ‘Meehanii’. – This was raised from seed in Meehan’s nursery, German-town, Philadelphia. It differs from ordinary H. Carolina in its smaller, shorter-stalked flowers; the corolla is more cup-shaped; leaves thicker and more coarsely wrinkled. May be a hybrid.

H. stenocarpa K. Koch (H. Carolina var. stenocarpa (Koch) Bean) was the name given to a plant with narrow, elongated-elliptic fruits attenuated to base and apex. In the Elwes and Henry herbarium preserved at Kew there is a specimen from a tree at Syon Park, collected August 1910, with such fruits. No doubt it represents the plant described in their Trees of Great Britain and Ireland, Vol. 6, p. 1602, as H. stenocarpa. According to Henry, it has the corolla divided nearly to the base and hairy filaments as in H. diptera, but the foliage and four-winged fruits of H. carolina, and hence Henry thought it might be a hybrid between the two species as Koch had suggested. But Koch described the corolla as four-lobed (as in H. carolina). Rehder follows Perkins, the monographer of the genus, in sinking H. stenocarpa in H. carolina, while recognising the plants with corolla divided almost to the base as a forma (see above). 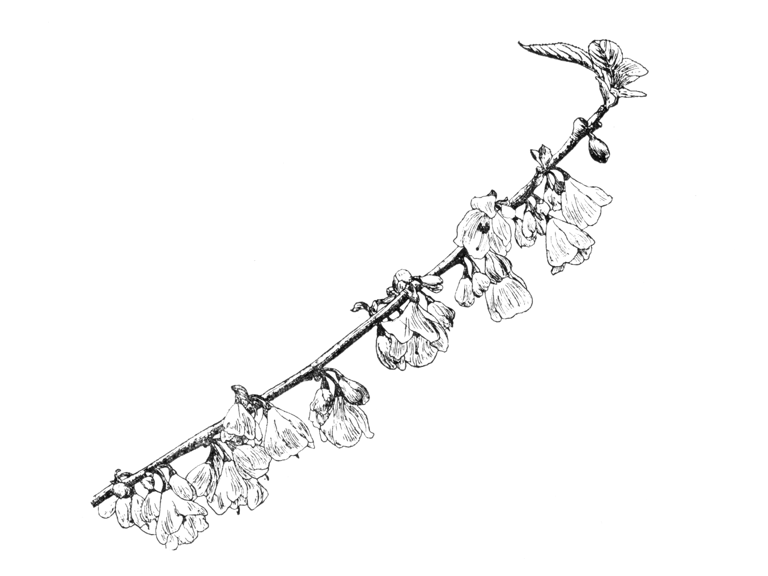 In the reprint of Volume II a reference was added to a paper by J. L. Reveal and M.J. Seldin in Taxon, Vol. 25 (1), pp. 123-40 (1976). If the authors’ conclusions were to be adopted the name H. carolina Linnaeus would have to be transferred to the species generally known as H. parviflora Michaux and the name H. tetraptera Ellis taken up for H. carolina as hitherto understood. After careful consideration it has been decided that on both nomenclatural and taxonomic grounds the authors’ conclusions are unacceptable.