H. lasianthum is mainly represented in cultivation by the following subspecies (and by a form with unblotched flowers mentioned below):

subsp. formosum (Curt.) Heywood Cistus formosus Curt.; Helianthemum formosum (Curt.) Dun.; Helianthemum lasianthum subsp. formosum (Curt.) Cout- inho – A low shrub with wide-spreading branches, growing 2 to 3 ft high, but more in width, the young shoots erect, the whole plant grey with short down intermixed with which are numerous whitish, stellate or long simple hairs. Leaves oblong, oval or obovate, 1⁄2 to 11⁄2 in. long, 1⁄4 to 1⁄2 in. wide, three-nerved at the narrowed base, the apex rounded or abruptly pointed. Flowers borne at the end of short side twigs, clustered, but appearing successively; each flower 11⁄2 in. in diameter, bright rich yellow, each petal with a conspicuous brownish purple blotch near, but not reaching to the base. Sepals three, ovate, taper-pointed, with long, silky hairs and often with purplish bristles.

Native of S. Portugal; introduced in 1780; perhaps the most beautiful of all the sun roses we cultivate. It is perfectly hardy, and I have never seen it permanently injured by frost – even 30° to 32°. It is admirable for covering a dry sunny bank, and remains well furnished with foliage through the winter. It starts to flower in May.

In the typical state of H. lasianthum the flowers are smaller and the petals are unblotched or have a small blotch right at the base.

The unblotched form of H. lasianthum (f. concolor Hort.) has been in cultivation since early in this century and perhaps longer. But some of the plants of this form now in gardens descend from a seedling collected by Hugh Farmar in 1948 in the foothills of the Sierra de Estrela, Portugal, which was propagated and distributed by Messrs Notcutt (Journ. R.H.S., Vol. 88 (1963), p. 262). This clone has proved very hardy. 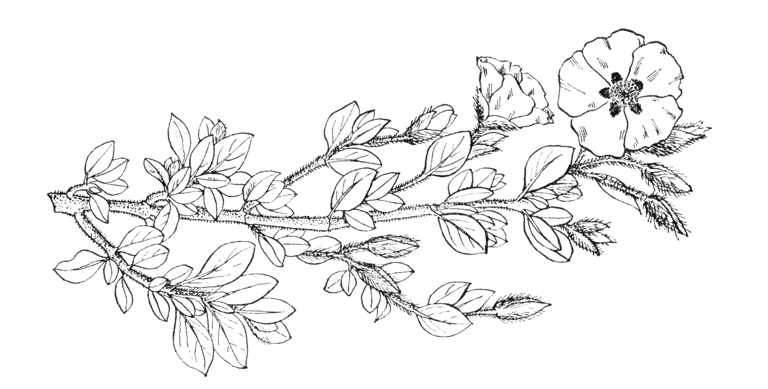