A deciduous shrub or small tree up to 20 ft high in this country, with shoots downy when young, and armed at each joint with a pair of spines, one straight and pointing more or less upwards, the other shorter, curved, and pointing downwards. Leaves alternate, 1 to 11⁄2 in. long, broadly ovate, three-nerved, and entire or slightly toothed; stalk 1⁄2 in. or less long. Flowers very numerous, and produced in a short branching umbel from each leaf-axil of the current year’s shoots; the individual flowers small, greenish yellow, but rather striking, wreathed as the shoot is with them, the parts in fives. Fruits 3⁄4 to 1 in. wide, consisting of a three-celled, roundish body, developing at the top a curious flat wing which runs all round, giving the whole fruit the aspect of a low-crowned, wide-brimmed hat.

Native of S. Europe eastwards to W. Asia; cultivated in this country for over three hundred years. In some of its native places it is used as a hedge plant. I remember seeing it put to this use on the road between Spalato (Split) and Salona (Solun), in Dalmatia. It is perfectly hardy at Kew, and I have never seen it even touched by frost there. It grows very well in ordinary loam, and although the flowers have no great beauty they are pretty, and abundantly produced in rows of umbels on the upper side of the shoot. The flat, disk-like, greenish yellow fruits, too, have an interesting appearance, quite distinct from that of any other hardy shrub. The branches are pliable and excessively spiny, and the tree has a legendary interest as the one of whose branches the Crown of Thorns was believed to have been made. It flowers in July and August. Well worth cultivation. There is an ancient specimen at Ham House, Petersham. 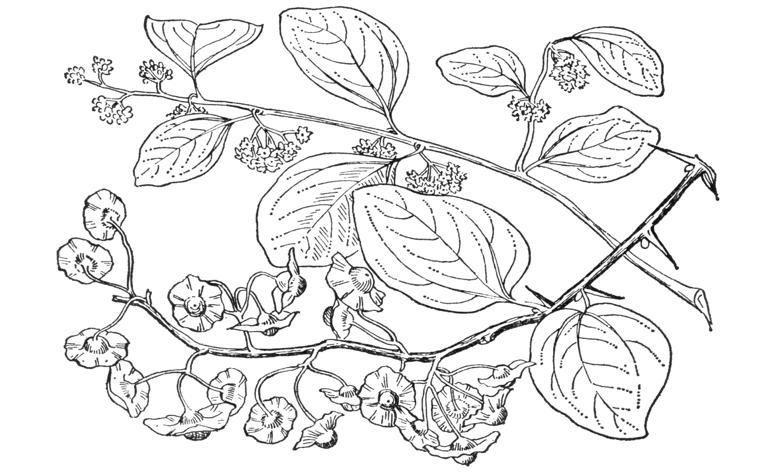