Veronica, Hebe or Parahebe bidwillii of most authors, not Veronica bidwillii Hook.

A prostrate shrub, wide-spreading and rooting at the nodes, the main stems giving off rather short, leafy branchlets, all downy. Leaves rather thick, glabrous, 1⁄16 to slightly over 1⁄8 in. long, ovate to broad-elliptic or almost orbicular, entire or with a lobule on each side near the base, broadly rounded to almost truncate at the apex, cuneately narrowed at the base to a short petiole. Racemes axillary with mostly six to ten flowers, up to 9 in. long including the peduncle, which is as long or longer than the flower-bearing part; pedicels slender, up to 3⁄4 in. long; they, and the peduncles, may be glabrous or sparsely downy; lowermost pedicels paired or in a whorl of three, rather distant from the others, which are alternately arranged. Corollas white or pale lilac, usually veined with pink, about 3⁄8 in. wide, the tube very short. Capsules glabrous, longer than the calyx.

A native of the South Island of New Zealand, in river shingles, screes, etc. Although known for well over a century, this species was, until recently, confused with P. × bidwillii, its hybrid with P. lyallii, and remained without a name until Margot Ashwin provided the name P. decora for it in Flora of New Zealand, Vol. 1 (1961), pp. 877 and 974.

The date of introduction of P. decora is not known, but the plant which Farrer discusses as the ‘true’ Veronica bidwillii is certainly P. decora (The English Rock Garden (1919), Vol. 2, p. 440). The oldest cultivated specimen in the Kew Herbarium is dated 1922. The species was rare in Farrer’s time and still is, but there is a plant on the rock garden by the lake at Wakehurst Place, which flowered well in 1972 (it does not do so every year). The most striking feature of this species is the disproportion between the leafy and flowering parts of the plant. On a specimen from the Wakehurst plant a shoot 11⁄2 in. with leaves about 1⁄8 in. long bears a pair of racemes almost 8 in. long (including the leafless peduncles).

P. × bidwillii (Hook.) W. R. B. Oliver Veronica bidwillii Hook.; Hebe bidwillii (Hook.) Allan – A natural hybrid between P. decora and P. lyallii, which occurs occasionally in South Island. Specimens of this hybrid were collected by Bidwill in the valley of the Wairau river and from them the elder Hooker described Veronica bidwillii as a species in 1852. Until Miss Ashwin established the true nature of these plants, P. decora (see above) was confused with this hybrid, though the two are really very distinct. In P. × bidwillii the influence of the other parent P. lyallii shows in the larger leaves, with often two pairs of lobules, and the shorter peduncles (up to 21⁄2 in. on the type specimens, against up to almost twice that in P. decora.) It is not certain whether P. × bidwillii is in cultivation. The plants grown under the name Veronica bidwillii seem to have been either P. decora or P. lyallii. 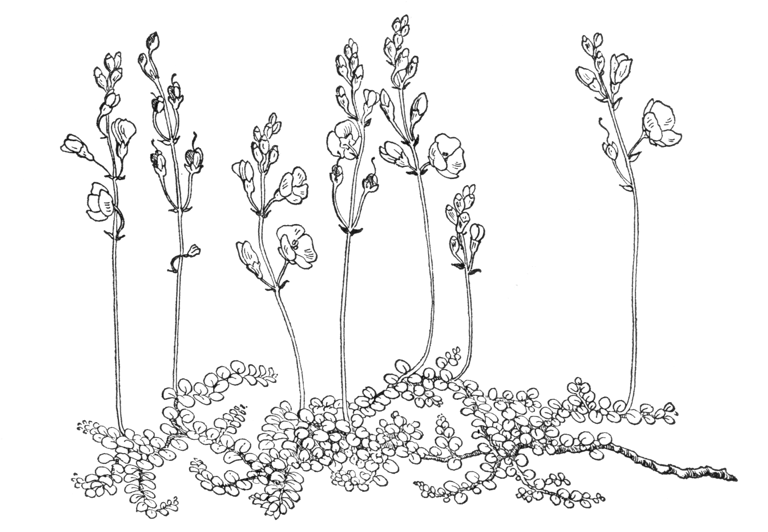 P. × bidwillii – Two clones of this hybrid are available – ‘Lake Tennyson’ and ‘Kea’, both deriving from wild plants found by Graham Hutchins in 1977.