A deciduous climber of vigorous, twining habit, reaching 20 to 30 ft in height; stems brown, quite glabrous, exuding a milky juice when cut. Leaves opposite, mostly oval or ovate, 2 to 4 in. long, about half as wide, not toothed, pointed at the apex, rounded or wedge-shaped at the base, with prominent parallel veins merging into a marginal one; stalk 1⁄4 to 1⁄2 in. long. Cymes 2 or 3 in. across, terminating short lateral shoots, produced in July and August, and consisting of eight to twelve flowers. Flowers 1 in. across, the corolla composed of five narrow, oblong segments, 3⁄16 in. wide, rounded at the end and downy, especially at the edges, brownish purple inside, greenish yellow outside; calyx 1⁄4 in. across, with five ovate lobes. Seed-pods in pairs, cylindrical, 5 in. long, 1⁄4 in. wide, tapering to a point where they are usually united; full of seeds, each with a remarkable tuft of silky hairs at the end 11⁄4 in. long.

Native of the Balkans, the coasts of the Black Sea, and the Near East; also of Italy, where it is rare and local; cultivated since the 16th century. It thrives in any soil of moderate quality, and requires a sunny position. Best propagated by division of the root in spring. It is a free-growing, hardy climber, interesting in its curious flowers, and may be used for pergolas, etc. The milk that exudes from the broken stems is poisonous, and in the south of Europe it is believed to be injurious to health to inhale the heavy odour of the flowers. 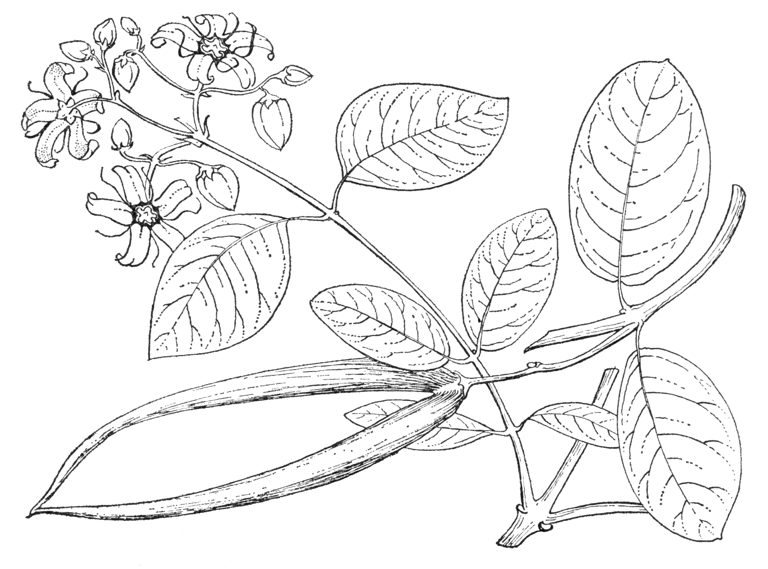