An evergreen shrub a few feet high; shoots erect, four-angled, very pithy, glabrous. Leaves opposite, glabrous, ovate, 11⁄4 to 5 in. long, about half as wide, shallowly toothed, rounded or shallowly heart-shaped at the base, tapered to the bluntish apex; stalk 3⁄4 to 2 in. long, deeply channelled. Flowers nodding, borne on terminal erect panicles 6 in. to 11⁄2 ft tall, loosely pyramidal, up to 6 in. wide at the base. Corolla tubular, 1 to 11⁄4 in. long, 1⁄2 in. wide at the five-lobed mouth, scarlet, yellowish in the throat. Stamens four, attached beneath the mouth of the corolla. Bot. Mag, t. 4881.

Native of S. Africa, introduced about 1850. As a shrub for the open ground P. capensis succeeds only in the milder parts, where it will reach 6 or 7 ft in height. Elsewhere it can be treated as an herbaceous perennial and should prove hardy provided the soil is well drained. But the best place for it is a sunny wall, where it will attain a height of 20 ft or more in the most favoured localities. In colder gardens its soft shoots will be cut back in winter, but this is really of no account, as some trimming is always necessary. The shade of red in the flowers varies considerably in depth, and is brightest in ‘Coccineus’. Easily increased by cuttings.

P. aequalis Hiern – This is the only other species known and is not often seen in cultivation. Lady Byng of Vimy obtained an Award of Merit for it at Vincent Square, September 15, 1936. It is a subshrub, woody below, more or less herbaceous above, 2 to 3 ft high, shoots quadrangular. Leaves opposite, stiff in texture, 1 to 4 in. long, about one-third as wide, ovate to lanceolate, bluntly toothed. Flowers quite pendulous on terminal panicles 6 to 9 in. high; corolla slender, tubular, 1 to 11⁄2 in. long, buff-pink outside, the mouth yellow with a bright red margin. On wild plants the blossoms are shorter-stalked and much more closely set on the panicles than in P. capensis, but this distinction is not shown so clearly by cultivated plants. A more important difference is that the corollas are narrower and almost straight, with the mouth of the tube quite regular and the lobes spreading only slightly; in P. capensis the corolla is curved, the mouth of the tube is oblique, and the lobes spread widely (Bot. Mag., n.s., t. 214). Native of S. Africa; flowers from August to October. At Kew it is cut to the ground in most winters. Increased by cuttings. 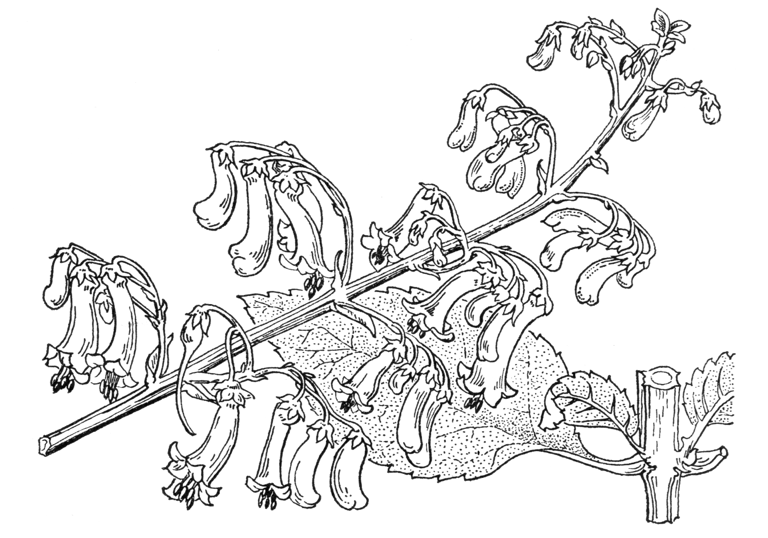 P. aequalis – The new cultivar ‘Yellow Trumpet’ is now well known in gardens, where it can be grown without the protection of a wall and attains a height of two or three feet. Distinguished by its pure, soft yellow flowers, the original plant was found on Marwaga Mountain, south-west Natal, at between 5,000 and 6,000 feet, where quite severe night frosts are frequent. The late Mrs Frances Pace established it in her garden at the foot of the mountain and gave plants to neighbours, among them Mrs Rennie of Sunset Farm, whence it was introduced by Mr Burtt to the Royal Botanic Garden, Edinburgh, in 1973. ‘Yellow Trumpet’ was named and distributed commercially by Messrs Hillier, whose stock derives from cuttings given to the late Sir Harold Hillier by the nurseryman Trevor Schofield of Natal. He had received cuttings from Mrs Taylor of Wyldeholme Farm, who had also received a plant from Mrs Pace (The Garden (Journ. R.H.S.), Vol. III, pp. 297-8 (1986)).