A tree 80 to 100, occasionally 150 ft, high; pyramidal as a small tree in cultivation with stiff horizontal branches; young twigs not downy; buds brownish yellow. Leaves arranged all round the branchlets, more thinly beneath, the upper ones pointing forward; they are 3⁄4 to 11⁄4 in. long, stiff, quadrangular, spine-tipped, dark green in the type, with three or four lines of stomata on all four faces. Cones cylindrical, shining, straw-coloured when ripe; 3 or 4 in. long, about 11⁄4 in. wide; scales wavy, oval, blunt and jaggedly toothed at the apex; seeds 1⁄8 in. long, with a wing 1⁄4 in. long.

Native of the Rocky Mountains, mainly in Colorado, E. Utah, E. New Mexico, and N. Arizona, but with scattered stands as far north as Montana; discovered by Dr Parry in 1862. It was in commerce in Britain by 1875, probably from seeds sent by the commercial collector Roezl, though some of those collected by Parry in 1865 may have been sent to Britain. Typical trees, with dark blue-green leaves, are very rare in gardens, where the species is almost wholly represented by the glaucous forms. There is an example at Westonbirt in Willesley Drive, measuring 56 × 4 ft (1969), and another at Leonardslee in Sussex.

P. pungens is allied to P. engelmannii, differing in its glabrous shoots, and in its bluer, more pungently pointed, leaves. Its bark becomes thick and furrowed on old trees, whereas in P. engelmannii it remains comparatively thin, and scaly.

f. glauca (Reg.) Beissn. and f. argentea Beissn. Blue Spruce. – P. pungens varies much in the more or less glaucous hue of its foliage; many shades may be selected in any batch of seedlings, and the most striking, with blue or silvery leaves, have been perpetuated by grafting. The oldest known clone descends from a tree that grew in Prof. Sargent’s garden at Harvard, where it had been raised from the seeds sent by Parry in 1865. Cuttings from this were taken by Anthony Waterer during a visit to America in 1877 and plants distributed by his Knap Hill nursery under the name Abies parryana glauca. This clone, which has never received a distinctive name, received a First Class Certificate in 1890. Probably many of the older trees are of the Knap Hill clone, though some may be seedlings. One of the original propagations still grows in the Knap Hill Nursery and measures 65 × 53⁄4 ft (1974). Two of the finest specimens are: Westonbirt House, Glos., 73 × 51⁄2 ft (1967) and Tring Park, Herts, 65 ×6 ft.

To those who admire silvery trees the blue spruces may be recommended as some of the most handsome. This applies more to young specimens; with age they are apt to become rusty and thin of foliage at the bottom, especially those selected forms that have been grafted on common spruce.

The following are the more important named selections:

‘Glauca Procumbens’ and ‘Glauca Prostrata’. – Of spreading or prostrate habit. It is uncertain whether these names really represent clones, since, as pointed out by Dr Krüssmann, similar plants can be raised from any of the varieties of blue spruce, by using lateral shoots as scions. The tree forms are always propagated from leading shoots.

‘Koster’. Koster’s Blue Spruce. – According to Den Ouden and Boom, this name does not represent a clone. The plants originally sent out by Koster towards the end of the last century were grafted from a number of selected seedlings with glaucous foliage. Later the firm of C. B. van Nes & Son made a re-selection of ten plants, uniform in habit and in their silvery-glaucous foliage, and the present commercial stock derives from these (Man. Cult. Conif. (1965), p. 283).

‘Moerheim’. – Of slender, conical habit, ultimately 30 ft or more high. Leaves bluish white in both summer and winter. Raised by Ruys at the Moerheim nursery, Holland. 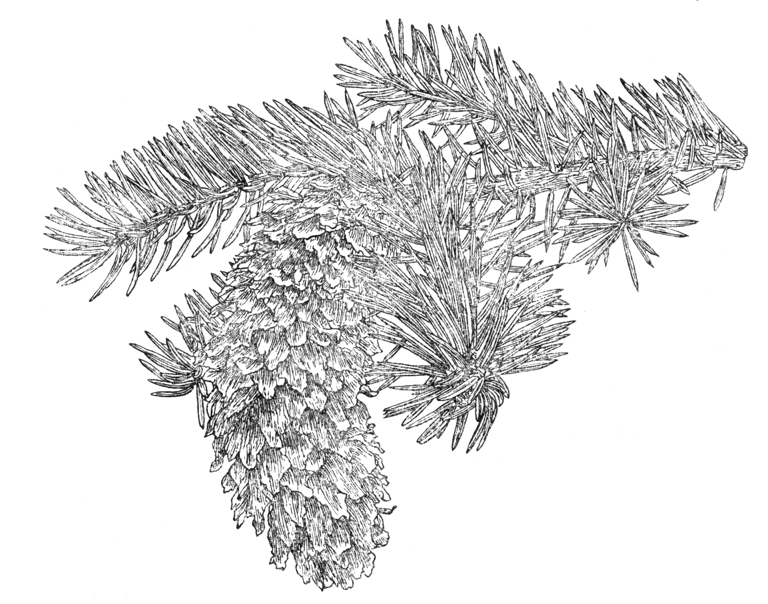 † cv. ‘Hoopsii’. – This is now considered to be the best of the silvery-leaved clones. It was raised in the Hoops nursery in Holland and put into commerce by Grootendorst’s nursery in 1958.