A low evergreen shrub, forming in cultivation a neat, dense, almost hemispherical mass of drooping branches; occasionally it makes a small tree in the wild, up to 10 ft high. Branchlets produced in whorls, very slender and interlacing, glabrous and green when young, later brown. Leaves 1⁄4 to 1⁄2 in. long, 1⁄16 to 1⁄12 in wide, linear-oblanceolate, tapered at the base, rounded at the apex and often shortly apiculate, but not pungently pointed, dull green above, pale and greyish beneath from two bands of stomata, which are separated by a green, raised midrib. Fruit a small, bright red, plum-like body 1⁄4 in. across, containing one seed.

Native of Tasmania and the mountains of New South Wales, quite hardy at Kew, where it has withstood 30° of frost without injury. It is a distinct shrub, and although quite healthy only attained 5 ft in height in fifty years or perhaps longer. Fruits have occasionally been borne at Kew.

A plant at Wakehurst Place, Sussex, probably half-a-century old, is about 5 ft high and 6 or 7 ft across, on a short, stout trunk. At Borde Hill in the same county there is a slightly smaller plant of about the same age. 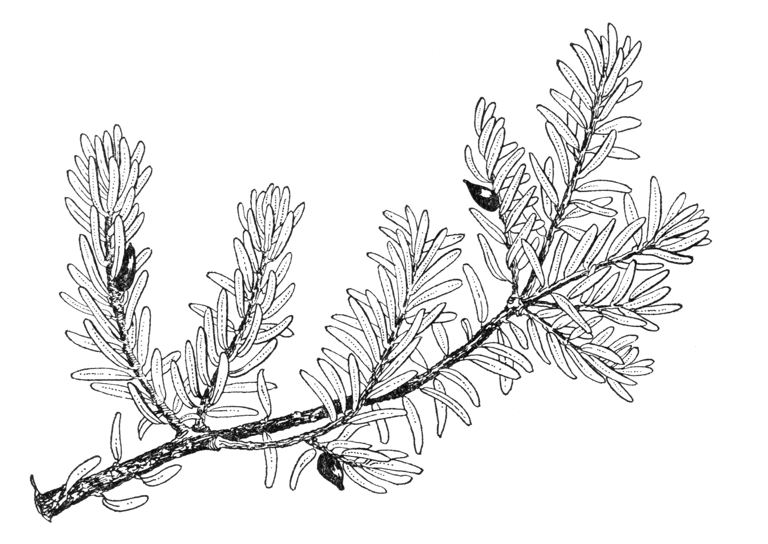 Although the name P. alpinus has usually been attributed to Robert Brown, he never in fact validated it with a description and it remained a bare name until described by J.D. Hooker in Flora Tasmaniae, Part 1, p. 356 (1857). The name P. lawrencei Hook.f. (1845, as P. lawrencii) has priority over P. alpinus and would be the correct name provided only one species is involved. But de Laubenfels considers that the two names represent distinct species, and furthermore that P. lawrencei is conspecific with P. acutifolius of New Zealand (described in 1884).