An evergreen shrub of bushy habit, usually, as found wild, from 4 to 12 ft high; young branchlets very slender, clothed with a dense, short, greyish white down; both they and the leaves are aromatically scented when rubbed. Leaves opposite, either roundish, obovate, or oval; entire or with a few comparatively large teeth, from 1⁄6 to 1⁄3 in. long, usually about 1⁄4 in. wide; dark, rather glossy green above, paler and dull beneath, both surfaces sprinkled thickly with tiny pitted glands; stalk 1⁄12 to 1⁄8 in. long. Flowers rich blue-purple or deep lilac, produced during April and May in short terminal racemes of five or more. Corolla 3⁄8 in. wide, somewhat bell-shaped, but rather pouched on the lower side, with five rounded lobes, the lower lobes projecting more than the upper ones. Stamens four, purple, very short, attached to the base of the corolla. Calyx 1⁄8 in. wide, helmet-shaped, with two unequal rounded lobes, scaly outside, purplish. Style purple, as long as the corolla. Bot. Mag., t. 9061.

Native of Tasmania, whence it was introduced in 1824, and of S.E. Australia. This is one of the most beautiful of all cultivated Tasmanian shrubs, but is unfortunately too tender for all but the milder counties. Even there it is usually grown on a wall. In a climate like that of Kew it might, if given a sheltered place on some warm south wall, survive through a series of mild winters, but I am aware that even under most favourable conditions its tenure would be insecure. It is quite frequently seen in the gardens of Cornwall and S. Devon, always beautiful in the spring time. Nowhere have I seen it so fine as in the Rectory garden at Ludgvan, near Penzance. A plant on a wall there was, when I saw it, some 10 ft high, one gorgeous mass of blue-purple. I believe it is not a long-lived shrub, but it takes root very readily from soft cuttings in early summer. 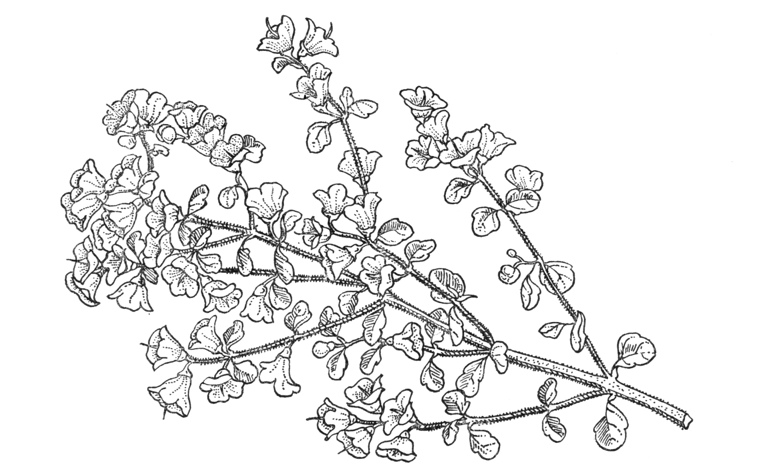