A deciduous tree, occasionally 100 to 130 ft high, with a trunk 2 to 3 ft thick; branches spreading horizontally; young shoots glabrous. Leaves linear, 11⁄2 to 21⁄2 in. long, 1⁄12 to 1⁄8 in. wide; produced in a radiating cluster from the end of short, spur-like branches, or on terminal shoots singly and spirally arranged. Their arrangement and general aspect are similar to those of larch, but the leaves are stouter and larger than those of any true larch. In spring they are of a tender yellowish shade of green, and in autumn they turn a rich golden yellow before falling. Male flowers yellow, produced in densely clustered catkins about 1 in. across at the end of the short, spur-like branchlets. Cones about 2 in. long, nearly as wide; the scales thick, woody, triangular, blunt, often notched at the tip, 3⁄4 to 11⁄4 in. long, ultimately spreading and falling away with the seeds.

Native of China, where it was discovered in the Chekiang province and introduced by Fortune in 1854. Slow-growing, but perfectly hardy, it is one of the most beautiful as well as one of the most interesting of trees. The finest tree I have seen was in Messrs Rovelli’s nursery at Pallanza, on Lake Maggiore. This was nearly 70 ft high, and very fertile; when I saw it in 1912 there were beneath its boughs hundreds of young trees that had sprouted from its fallen seeds, varying from a few inches to 2 or 3 ft high. It dislikes limy soil. 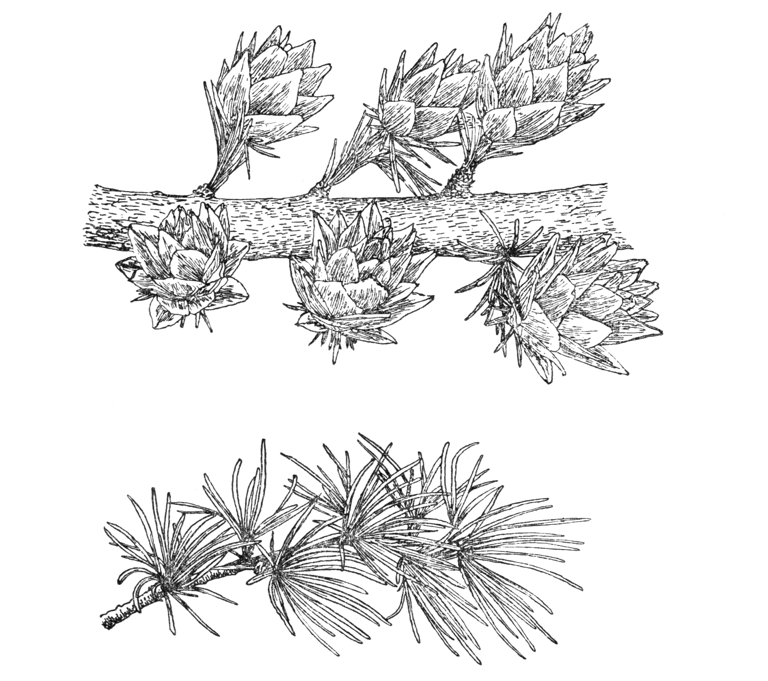