An evergreen bush 6 ft high, of erect, rather slender habit when young; young shoots glabrous. Leaves glabrous, narrow to broad elliptic or lanceolate-elliptic, rounded or wedge-shaped at the base, tapered gradually to a long, slender apex; 11⁄8 to 31⁄3 in. long, 5⁄8 to 1 in. wide; finely and shallowly toothed (the teeth gland-tipped); polished, dark, sometimes purplish green above; paler and covered with minute dots beneath; stalks 1⁄8 to 1⁄6 in. long, hairy at the margins. Flowers solitary at the end of short twigs or in the leaf-axils; pure white, 11⁄2 in. across; pedicels 1⁄8 in. long with four bracteoles; calyx of five green triangular sepals 1⁄2 in. across. Stamens erect in a dense cluster, 5⁄8 in. long; anthers yellow. Bot. Mag., t. 9277.

Native of W. China; introduced by Wilson to Veitch’s Coombe Wood nursery in 1900. It is a bright-leaved hardy evergreen, with copper-tinted young leaves; it is not in the first rank as a flowering shrub, although quite pretty when well in flower. In cultivation it may reach a greater height than the 6 ft given in the description; Sir Giles Loder has it over 12 ft high at Leonardslee in Sussex, where it is quite hardy. There is a plant almost as large in the R.H.S. Garden at Wisley.

C. (cuspidata × saluenensis) ‘Cornish Snow’. – A very beautiful hybrid raised by J. C. Williams at Caerhays Castle, Cornwall. In general it resembles the former parent, but the flowers are larger and the white petals have a pink flush on the back. Other hybrids of the same parentage are in cultivation, ‘Michael’, also raised at Caerhays, being one of the best.

C. fraterna Hance – A near relative of C. cuspidata but easily distinguished by the shoots, pedicels, and calyx being densely villose. It comes from E. China and is not likely to be hardy in any but the most sheltered gardens. 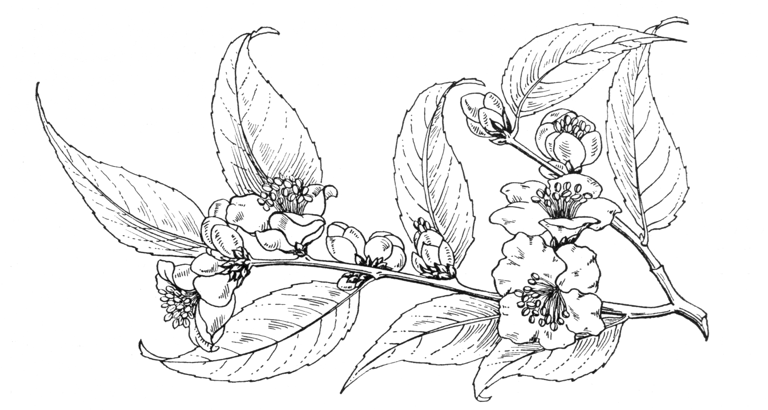 † C. ‘Cornish Spring’. – A hybrid between C. cuspidata and a pink-flowered single cultivar of C. japonica, raised by Miss Carlyon at Tregrehan, Cornwall (1972). The flowers are single, light pink, about 13⁄4 in. wide, opening in March or April.

C. fraterna – This species has been used by hybridists, one result being ‘Tiny Princess’, with small, semi-double flowers, white shaded pink. USA, 1961.