A deciduous shrub spreading by underground stems, or a small tree; young shoots covered with short hairs, which persist through the winter. Leaves oblong, inclined to oval and obovate, 3 to 5 in. long, 1 to 2 in. wide, pointed, wedge-shaped or rounded at the base, coarsely toothed; dark green and soon becoming glabrous above, but coated beneath with a persistent, greyish-white (at first quite white), close felt. Male catkins 4 in. or more long. Nut of good flavour, egg-shaped and not flattened, 3⁄4 to 1 in. long, usually solitary in a bur 11⁄2 in. across.

Native of eastern N. America, where it is often known as the ‘chinquapin’; introduced, according to Aiton, in 1699, but very rare in cultivation. There are shrubby examples at Kew which flower, but have never, in my experience, borne fruit. It probably needs a hotter summer than ours, as a small tree at Verrières, near Paris, often fruits freely. This chestnut is distinguished by its shrubby habit, and white under-surface of the leaf. In N. America a single plant often forms a thicket through its habit of spreading by suckers.

C. ozarkensis Ashe – A tree to 65 ft high. Leaves larger than in C. pumila (5 to 8 in. long), coarsely toothed, downy beneath. Fruit densely spiny. According to Sargent, it replaces C. pumila in the northern part of the Mississippi Basin.

C. seguinii Dode – A Chinese species allied to C. pumila and identified with it by early botanists. It is common in thickets over much of the eastern and central parts of the country. Leaves glabrous beneath except on the veins; the husk contains three or more fruits. 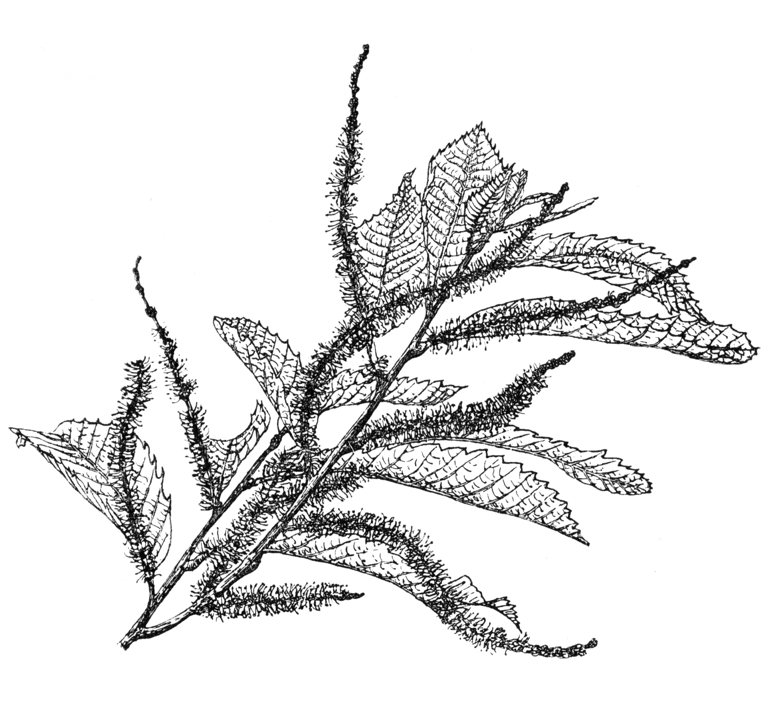