A tree 100 to 120 ft high in Japan, with a reddish-brown trunk 3 or 4 ft in diameter. Branches horizontal or depressed, bearing the successive ramifications in two opposite horizontally spreading rows. The final leaf-bearing sub­divisions are, leaves and all, about 1⁄16 in. wide, and rather flattened. Leaves scale-like, not glandular, of two sizes, the lateral pairs the larger, about 1⁄12 in. long, somewhat boat-shaped, clasping the smaller ones above and beneath; all are blunt, thick, and fleshy, rich green above, paler beneath. The margin of every leaf beneath is defined by a thin line of glaucous bloom, which gives a variegated appearance. Cones solitary on a short branch, 1⁄3 in. diameter, brown; scales usually eight, the surface slightly hollowed towards the centre, where there is a small projection.

Native of Japan, and long cultivated there for its beauty and for its timber; introduced by John Gould Veitch in 1861. It yields the most valuable of Japanese timbers. As an ornamental tree in the British Isles it is very pleasing. It does not grow very fast, and the largest trees in the country are only about 70 to 80 ft high, but well-grown specimens are very graceful in their soft feathery branching. It likes a good moist soil, but will not thrive where there is much lime. With age and on poor soils it is apt to get thin, but this can to some extent be remedied by clipping off the ends of the shoots to induce denser branching – a process it bears very well. It is one of the favourite subjects of the Japanese for dwarfing. It is well distinguished from C. pisifera and C. lawsoniana by its blunt, round-ended leaves, and the thin glaucous line just beyond the margins beneath.

Numerous varieties are in cultivation, of which the following are the most important:

cv. ‘Nana Gracilis’. – One of the finest medium-dwarf conifers, growing 8 to 10 ft high; foliage blackish green. A tree of great individuality, with a rugged aspect.

var. formosana (Hayata) Rehd. – A tree to 125 ft found in the northern and central part of Formosa. It differs from the Japanese type in the leaves, cones, and seeds being smaller.

cv. ‘Lycopodioides’. – Branching irregular, not strictly in two rows, the ultimate branchlets much thicker, more four-sided, and less compressed than in the type. Like many Japanese plants, it was introduced almost simultaneously (in 1861) by Fortune and by J. G. Veitch. Although often stated to be of dwarf habit, there are specimens ranging from 37 to 46 ft in height at: Westonbirt, Glos.; Scorrier House, Coldrenick, and Tregrehan, Cornwall; Bicton, Devon; Nymans, Sussex; Linton Park, Kent; and Wansfell, Ambleside, Westm.

cv. ‘Sanderi’. – A curious little shrub of rounded, dense habit, with stiff, spreading, awl-shaped leaves, 1⁄8 to 1⁄6 in. long, of a very glaucous blue tint, and borne in decussate pairs. It was put into cultivation by Sander’s nursery as “Juniperus sanderi”, but originated in Japan and does not appear to be a juniper. Masters and Beissner were both of the opinion that it is a juvenile state of C. obtusa. 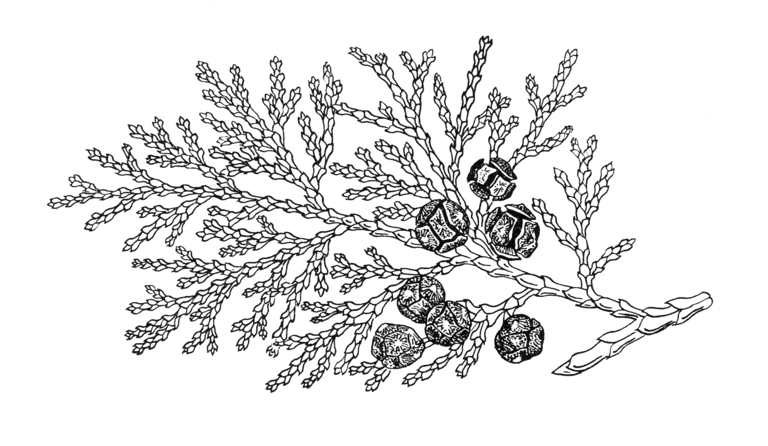 † cv. ‘Kosteri’. – Unless trained, this makes a spreading bush to about 4 ft high. It is a picturesque specimen, with bright green foliage in twisted sprays.

† cv. ‘Mariesii’. – Slow-growing, of conical form, with yellowish or creamy young foliage, becoming greener in winter. It makes a rather skimpy specimen unless the leading shoots are pruned. Also known as ‘Nana Albo-variegata’ and ‘Nana Argentea’.

cv. ‘Nana. – This cultivar and ‘Nana Gracilis’ appear out of alphabetical order near the top of page 598.

cv. ‘Nana Gracilis’. – This is inclined to produce strong-growing reversion shoots, especially if grafted, and these should be cut out. Otherwise it may grow to an uncharacteristic height – almost 30 ft at Stourhead.

† cv. ‘Nana Lutea’. – Dwarfer than ‘Nana Aurea’ and brighter gold, holding its colour well in winter. Raised by Messrs Spek of Boskoop and put into commerce in the early 1960s. A more vigorous sport from this has been named ‘Goldilocks’.

† cv. ‘Pygmaea’. – A low-growing shrub to about 2 ft high but much more in width, with bright green, fan-shaped sprays becoming bronzed in winter. Humphrey Welch remarks that it may become upright and 8 ft or so high if grafted.

cv. ‘Sanderi’. – The status of this cultivar, thought by some to be a juniper, or even a distinct genus, has long been a subject of controversy. However, analysis of its resin by L. J. Gould has shown that it is almost beyond doubt a juvenile form of Thuja orientalis (Bot. Journ. Linn. Soc., Vol. 77, pp. 217-21 (1978)).

† cv. ‘Tempelhof’. – A broad, compact bush with vividly green foliage in fan-shaped sprays, eventually 9 ft or so high. The original plant grew in the Tempelhof nurseries of Messrs Konjin near Boskoop.