C. creticus L. (and not C. villosus L. nor C. incanus L.) is the valid name for a variable and taxonomically difficult species which occupies a wide range in the Mediterranean – indeed it is one of the most widespread and common of the cistuses in a wild state. Several attempts have been made to bring its manifold forms into an orderly system of subspecies and varieties, but with differing results. For garden purposes there is, in any case, nothing to be gained from following the botanists into this labyrinth. The following is a generalised description:

A much-branched, compact bush 2 to 4 ft high; young stems shaggy with long hairs, or downy with short stellate hairs (stems also glandular in some states, mostly in Crete and other parts of the E. Mediterranean). Leaves variable in shape from ovate to obovate or almost rounded, pointed to rounded at the apex, tapered at the base to a short, flat, broad stalk, usually swollen at the base and more or less connate with the stalk of the opposite leaf; hairy on both sides, but more so below; veins impressed; margins often wavy. Flowers in some shade between purple and rose, yellowish at the base of the petals; 2 to 21⁄2 in. across; they are borne in a cymose cluster of three to five at the ends of the shoots. Flower-stalks and calyces closely downy to densely hairy and sometimes glandular; sepals broadly oval, with fine points.

Native or the Mediterranean region and (as pointed out above) very polymorphic. The most distinct state is the glandular one (C. creticus L. in the narrow sense), in which the stems, the undersides of the leaves and the inflorescence exude an aromatic gum (the chief source of Gum ladanum). This, however, is not confined to Crete but is found in other parts of the E. Mediterranean. A glandular race is also found in Corsica. Owing to its variability, and the number of hybrids between it and other species that have appeared in cultivation, there is considerable confusion in gardens as to its identity. It appears, however, to be tender in all its forms. From C. albidus and C. crispus, both of which have flowers of similar colouring, it differs in its pinnately veined leaves, whilst they are marked by leaves with three longitudinal veins. 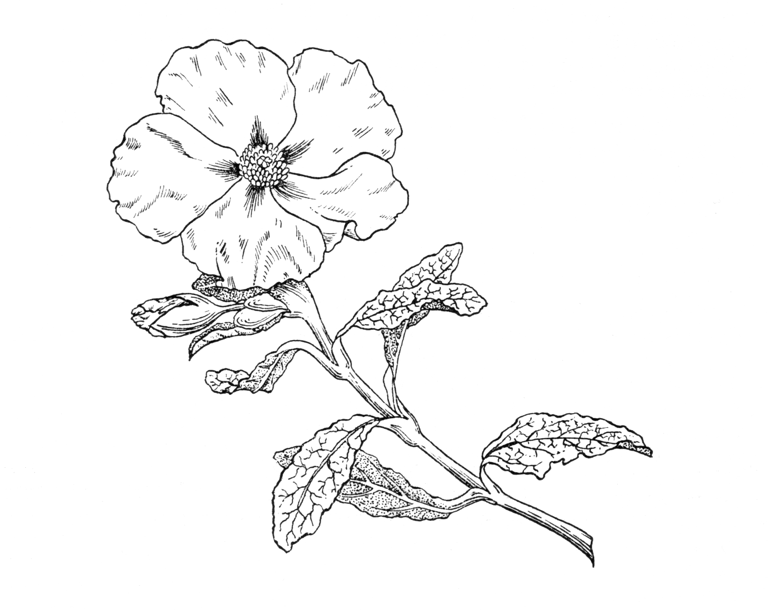 As remarked at the top of page 619, there is no clear-cut distinction between C. creticus sens. strict. (C. incanus subsp. creticus of Flora Europaea) and its more western relative (C. incanus subsp. incanus of the same work). But in the former the leaves are wavy-edged and up to about 1 in. long, in the latter plane and up to twice that length.