A deciduous shrub up to 6 or 8 ft high, branches erect; young shoots very downy. Leaves obovate 11⁄2 to 4 in. long, 3⁄4 to 2 in. wide, tapering to a very short stalk at the base, toothed on the terminal half, pointed; upper side with scattered short hairs, lower side felted with a thick, pale wool; veins in seven to ten pairs. Flowers fragrant, white, nearly 1⁄2 in. across, produced during September in erect, woolly racemes up to 6 in. long, either terminal or from the uppermost leaf-axils. Sepals woolly, ovate-oblong, 3⁄16 in. long; stamens glabrous; style downy; flower-stalk woolly, 1⁄8 in. long. Bot. Mag., t. 3743.

Native of the south-east United States; introduced in 1731. Closely akin to C. alnifolia, and sometimes regarded as a variety of it, it is distinguished by flowering a month later and by its greyish aspect due to the woolly covering of its various parts. Its flowers, too, are purer white, larger and more ornamental, and the style is downy. Its distribution in a wild state does not extend so far north as that of C. alnifolia, and it is not quite so hardy. At Kew, however, it does not suffer from cold. 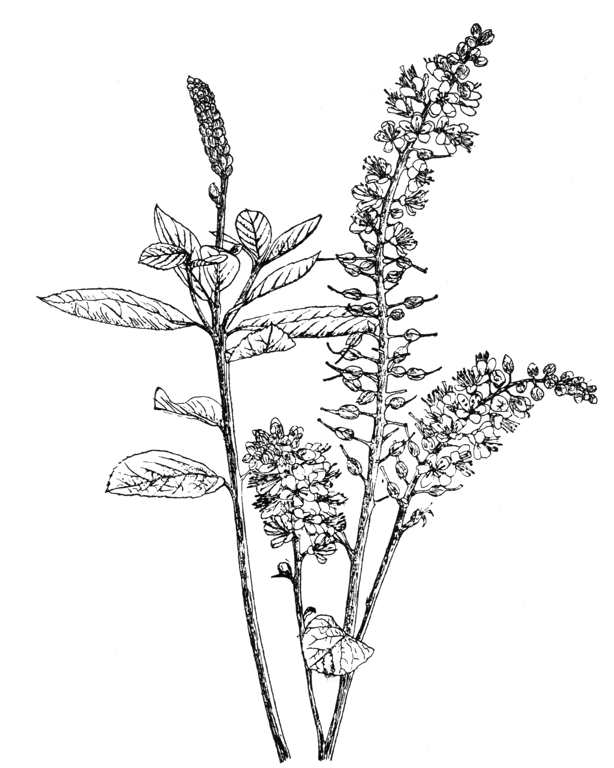