A deciduous shrub or small tree up to 20 ft in height, of bushy habit; young shoots glabrous. Leaves ovate sometimes broadly so with a slender point and wedge-shaped or rounded base, 11⁄2 to 3 in. long, 3⁄4 to 13⁄4 in. wide; margin undulated; both surfaces have minute, scattered hairs at first, becoming glabrous except for brown tufts in the vein-axils; stalk 1⁄8 to 1⁄4 in. long. Flowers small and inconspicuous, produced in a round, button-like mass 3⁄8 in. across. The beauty of the shrub, as in C. florida and C. nuttallii, is in the bracts that accompany the inflorescence. These are four in number, lanceolate, slender-pointed, spreading; 1 to 2 in. long, 1⁄2 to 3⁄4 in. wide; creamy white. The main-stalk is slender, glabrous, 2 to 21⁄2 in. long. Fruit fleshy, strawberry-like in shape.

Native of Japan, Korea, and Central China. The bracts and flowers are borne freely in May and June on short, lateral spurs at the end of a small two- or four-leaved twig and stand up erect in rows along the branches; they have a very striking and beautiful effect. Of the species that owe their beauty to their large showy bracts as distinct from the true flowers, this is the most promising for our climate. It is only likely to be confused in gardens with C. florida, its East American ally, but its long slender-pointed bracts readily distinguish it. Botanically it is more nearly allied to C. capitata, as is shown by the agglomerated fruits.

var. chinensis Osborn – This variety was introduced from Hupeh, China, by Wilson in 1907 and plants were first received at Kew from the Arnold Arboretum in 1910. There does not seem to be any clear botanical distinction between it and the typical Japanese tree, but under cultivation it grows more freely and its flowers are larger than those of any form introduced from Japan. Both Henry and Wilson found it as a tree 30 ft high and the former notes that its fruit is sweet and edible. It blossoms in June, the petal-like bracts being lanceolate, 11⁄2 to 21⁄2 in. long, 3⁄4 to 1 in. wide, at first green, gradually changing to pure white; they remain in good condition for several weeks, becoming creamy white and brownish in the end. As explained above, the true flowers are crowded in a button-like mass surrounded by four of these large white bracts. It blooms in great profusion, the horizontally growing branches being almost hidden by the erect inflorescences, on stalks from 2 to 3 in. long. The bracts evidently vary in shape on wild trees. A specimen collected by Wilson in Hupeh has them 2 in. long by 15⁄8 in. wide. Bot. Mag., t. 8833.

This beautiful flowering tree should be in every garden, being perfectly hardy, growing well in a rich, well-drained, loamy soil and blossoming at a season when most hardy trees and shrubs are out of flower. On account of its moderate size it is particularly suitable for small gardens or confined spaces. It should, however, have an at least moderately sunny place. Both the type and the variety, at least in some gardens, colour beautifully in the autumn; the red tinting of the leaves starts early and may last, increasing in brilliance, for a month before the leaves finally fall.

C. (kousa × nuttallii). – A self-sown seedling of C. kousa, which arose in the garden of N. G. Hadden, Porlock, Somerset, appears to be of this parentage. 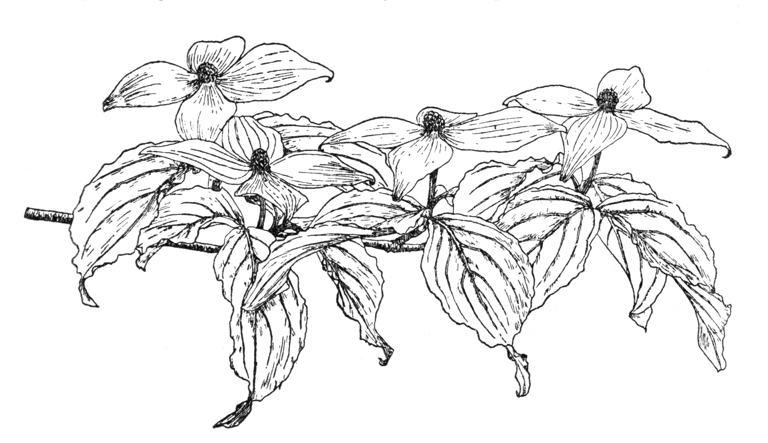 C. kousa × ?C. capitata. – Mention was made on page 704 of a self-sown seedling of C. kousa of which the suggested pollen-parent was C. nuttallii. This arose in the garden of the late Norman H. Hadden (d. 1971), at Underway, near Porlock, Somerset, and it was he who suggested this parentage – indeed, he exhibited a specimen at Vincent Square, so labelled, in 1968, under the cultivar name ‘Porlock’. However, Lady Anne Palmer, who is responsible for the National Collection of Cornus held by the Rosemoor Garden Trust in Devon, has pointed out (in litt.) that this parentage is unlikely, for two reasons: C. nuttallii flowers so much earlier than C. kousa that the chance of cross-pollination is remote; and secondly, that the plant in the Rosemoor collection, propagated from one at Underway, is semi-evergreen in mild winters, which suggests the influence of C. capitata. To this it may be added that C. kousa and C. capitata are very much more closely allied to each other than either is to C. nuttallii, that their flowering times overlap, and that Mr Hadden himself recorded in an article on his garden that C. capitata produced self-sown seedlings there.

The Rosemoor specimen, about 28 ft high (1985), is hardy and flowers freely in June or early July. Its outstanding feature is that the bracts of the flowers turn pink almost immediately, which may, incidentally, explain why Mr Hadden suggested that C. nuttallii was the pollen parent, since in that species a pink flush in the bracts is quite usual. The leaves are mostly 21⁄4 to 3 in. long, 1 to 11⁄4 in. wide, elliptic to slightly obovate, acute to acuminate, finely appressed-downy beneath and with small brownish tufts in the axils; veins arching, mostly four on each side of the midrib. Flower-heads on peduncles up to 33⁄4 in. long; bracts obovate to broad-elliptic, up to 11⁄2 in. long and 1 in. wide, rounded to short-acuminate at the apex.

A plant in the National Trust garden at Knightshayes Court in Devon was raised from material given to the late Sir John Amory by Mr Hadden and was exhibited at Vincent Square on July 7, 1974, under the cultivar-name ‘Norman Hadden’. The example in the Hillier Arboretum, also under the name ‘Norman Hadden’, was propagated from material received directly from the raiser in 1966. But the plants in commerce under the name ‘Norman Hadden’ are believed to derive wholly or mainly from the Rosemoor tree mentioned above. Obviously further investigation is needed to establish whether or not the plants at Rosemoor, Knightshayes and the Hillier Arboretum represent a single clone. All are near to C. kousa and might be judged to be cultivars of that species but for the tendency of the leaves to persist in winter. C. capitata is itself closely allied to C. kousa and the relationship between the two is in need of further study.