A very dwarf, close-growing, rigidly branched, deciduous shrub, scarcely more than 1 or 11⁄2 ft high, but spreading over the ground several yards in extent; the branches pressing on the soil and taking root there; twigs downy. Leaves in two opposite rows or irregularly arranged, broadly ovate or obovate, 1⁄4 to 5⁄8 in. long, dullish green and glabrous on both sides, except for a few scattered hairs beneath, wavy-margined and somewhat scoop-shaped. Flowers solitary or in pairs, scarcely stalked, each one produced in the centre of a fascicle of leaves from the year-old wood; petals white tipped with rose, but little expanded. Fruit 1⁄4 in. long, roundish, bright red, nutlets usually two.

Native of China; introduced to France about 1895; first raised and grown by Maurice de Vilmorin at Les Barres (Loiret), where the original plant grew to 9 ft across. It is remarkable for its short, rigid branches, and close, prostrate habit. It resembles C. horizontalis, and by some writers is regarded as a variety of that species, but in general appearance and habit is quite distinct from that or any other species. It is a very pleasing plant for the rock garden, or a border of choice shrubs.

C. adpressus was later introduced again from W. Szechwan and more recently cotoneasters closely resembling it have been found in the E. Himalaya, S.E. Tibet and Upper Burma.

var. praecox (Vilm.) Bois & Berthault C. praecox Vilm.; C. nanshan Vilm.; C. nanchuanicus R. Reg. – A more vigorous plant than the type, growing to 2 ft or so high; leaves 1⁄2 to 1 in. long. Fruits 1⁄3 to 1⁄2 in. long, ripe in August. A charming dwarf shrub, remarkable for its large fruits. It was introduced from Szechwan by one of the French missionaries and originally raised, like the type, at Les Barres. 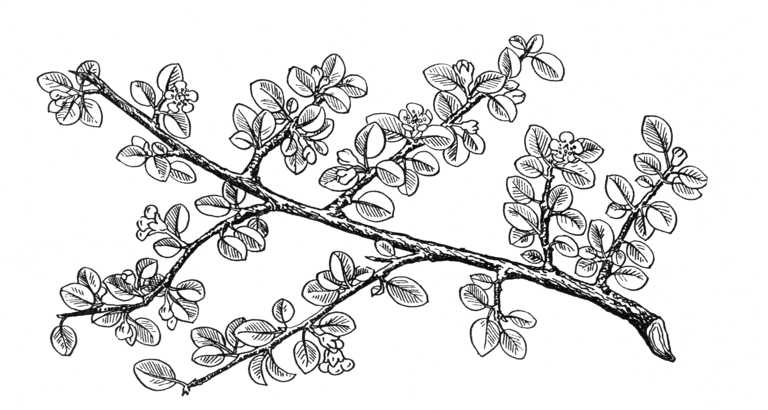