A deciduous shrub or small tree 20 ft high, with a dense, rounded head of thorny branches; young shoots quite glabrous. Leaves alternate, oval, obovate, or ovate; either entire or with three shallow rounded lobes, at the apex; 11⁄2 to 4 in. long, 3⁄4 to 2 in. wide; dark green, glabrous; stalk 1⁄3 to 5⁄8 in. long, slightly downy. Flowers green, crowded in a little ball about 1⁄3 in. diameter, the sexes on different plants. The balls are produced during July, either singly or (usually) in pairs, from the leaf-axils of the current year’s growth, each on a downy stalk 1⁄4 in. long. The male tree only appears to be in cultivation, and a head of fruit has not yet been produced in this country; but it is an elliptical, hard, shining mass 11⁄2 in. broad and 1 in. long, as seen in wild specimens.

Native of China, where it is widely spread; introduced to Britain in 1872. This tree, which is nearly allied to the Osage orange Maclura pomifera, but differs in flowering on the current season’s growth, in its fewer-veined leaves, and very much in the fruits, is perfectly hardy, and flowers frequently at Kew. Its flowers are of no ornament, and the plant itself, although interesting both economically and botanically, has no special merit for the garden. Its leaves are much used

in China for feeding the silkworm on, being considered as good for this purpose as the mulberry. 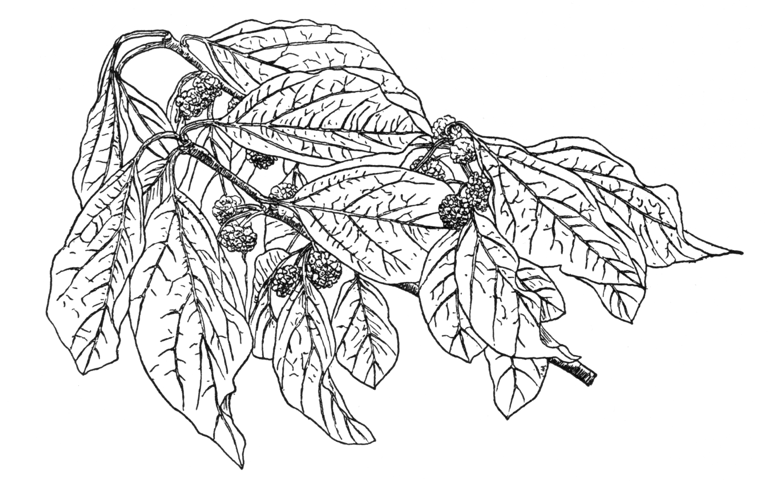