An evergreen shrub of apparently low, compact habit, and about 3 to 5 ft high; young branches warted. Leaves leathery, narrowly oval or slightly obovate, tapered at the base, more slenderly so at the apex; 2 to 6 in. long, 1 to 21⁄2 in. wide; strongly and conspicuously three-veined, often obscurely or shallowly toothed near the apex, dark green above, pale below, glabrous on both surfaces except for small tufts of down in the vein-axils beneath; stalk 1⁄4 to 1 in. long. Flowers dull white, 1⁄8 in. wide, densely crowded in stalked stiff cymes, 2 to 3 in. across. Fruits blue, 1⁄4 in. long, narrow oval. Bot. Mag., t. 8980.

Whether or not V. davidii is actually dioecious, it is so in effect, but many nurserymen now offer both ‘male’ and ‘female’ plants, and both must be grown if the beautiful fruits are to be seen. It received an Award of Merit for these in 1971.

V. ‘Jermyns Globe’. – A seedling of V. davidii of which the other parent was probably V. calvum. Although the original plant is not as globular in habit now as when it was first named, it is of low, compact and roundish habit. The foliage is not unlike that of V. tinus.

V. cinnamomifolium Rehd. – This is very similar to V. davidii, with the same conspicuously three-veined leaves, but it is a bigger shrub, or sometimes a tree 20 ft high; its inflorescence is much larger and more lax, its almost entire leaves are not so thick, and its fruits smaller. There is a plant about 15 ft high and wide on a garden wall at Borde Hill in Sussex, which is perfectly hardy. Wilson discovered this species on Mt Omei in W. Szechwan. 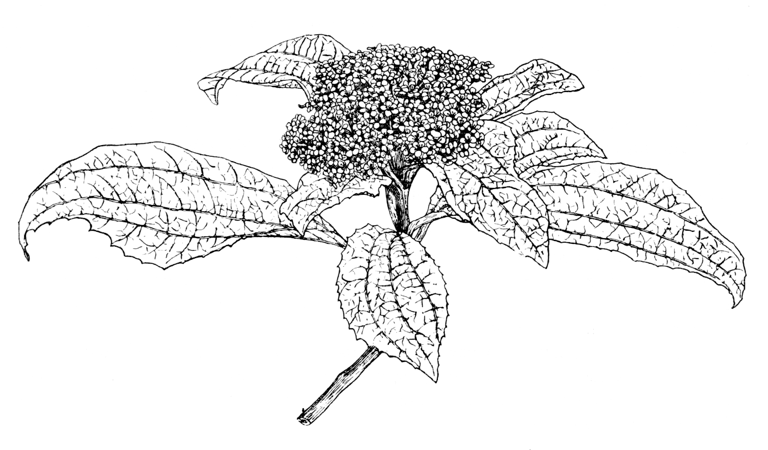 The first part of the second paragraph (page 694) was inadvertently omitted. V. davidii is a native of western China, and was introduced by Wilson for Messrs Veitch in 1904.