Native of Spain, and only really hardy in the milder parts of Great Britain. At Kew it needs the protection of a wall, but has been grown in the open no farther from London than Grayswood Hill near Haslemere, where shrubs 6 to 8 ft high were laden in May and early June with golden blossom from end to end of their branches, making most gorgeous pictures. Like so many of its race, this shrub is not long-lived, and care should be taken to sow a few seeds occasionally (it produces them in great abundance), to renew the stock if needed. It should have the sunniest position available, and is suitable for a hot bank in gardens where it can thrive in the open. For colder localities a place on a south wall is necessary.

A. complicatus (L.) Gren. & Godr. Spartium complicatum L. – If understood in a wide sense, this is a very variable species, divided into local races, some of which have been given specific or varietal rank. A deciduous shrub, low and densely branched, more rarely erect; young branchlets downy or hairy, later glabrous and, in some forms, whitish. Leaves usually trifoliolate, with lanceolate or oblong-ovate leaflets usually folded lengthways, glabrous above, covered beneath with short appressed hairs. Flowers yellow, in terminal racemes of varying length; calyx glandular in the typical form but eglandular in some races, with unequal lips. Of wide distribution from Madeira through N. Africa and the Mediterranean region to the Near East; also reported from the region of the Italian lakes. A. divaricatus (L’Hérit.) Sweet and A. parvifolius DC. are synonyms of the type; the above description also includes A. commutatus DC. and A. intermedius DC.

A. hispanica (Lam.) DC. – Flowers usually larger than in A. telonensis or A. complicatus and longer stalked, borne in dense racemes. A native of Spain and Portugal.

A. telonensis (Loisel.) Robert Cytisus telonensis Loisel.; A. grandiflorus Boiss. – Flowers larger than in A. complicatus, one to four together in short terminal racemes or heads; lower lip of calyx deeply toothed. A small, dense bush, native of the W. Mediterranean. According to Loudon it was introduced in 1800. 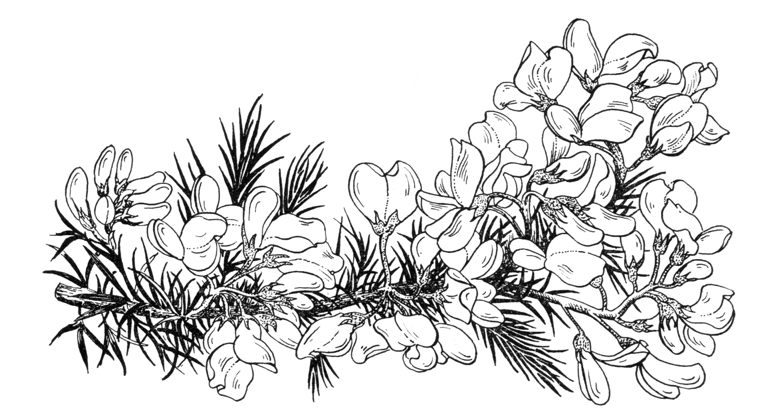