A shrub usually seen 2 to 4 ft high in this country, but sometimes taller (to 6 or even 8 ft). It has a rounded, dense habit, much like that of a dwarf cypress or juniper, the branches being very much forked and subdivided, and final ramifications very slender and short (1⁄2 to 1 in. long). Branchlets about 1⁄32 in. thick, often minutely downy. Leaves on adult plants scale-like, about 1⁄16 in. long, dusty green or somewhat glaucous, glabrous except for minute hairs on the margin, rounded at the apex; they do not, as in H. hectoris and lycopodioides, completely hide the stem, although usually appressed to it; the bases of each pair are united and clasp the stem. In young plants (occasionally on odd branches of older ones), the leaves are as much as 1⁄4 in. long, narrowly oblong, ovate or somewhat obovate, and vary from entire to irregularly or pinnately lobed, pointed and distinctly stalked. Flowers pale blue, 1⁄6 in. diameter, produced three to eight together at the ends of the branches in a small head about midsummer. Bot. Mag„ t. 7348.

Native of the South Island of New Zealand; long cultivated. It is fairly hardy, and during some seasons blossoms quite freely in June and July. It is worth growing for its neat appearance and remarkable cypress-like growth. 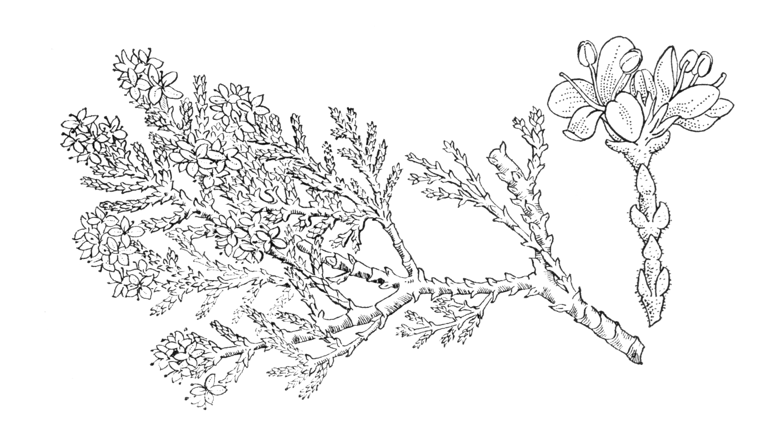 † cv. ‘Boughton Dome’. – A dwarf form, making a dense, dome-shaped, spreading bush about 1 ft high. This originated as a branch-sport on a plant of H. cupressoides growing in a Scottish garden and was noticed about 1970. It was named and distributed by Lady Scott (Valerie Finnis) from Boughton Dower House, and has received a First Class Certificate after trial at Wisley. Graham Thomas tells us that some self-sown seedlings of H. cupressoides in his garden resemble ‘Boughton Dome’ in habit.