A deciduous shrub up to 12 ft high in cultivation, more in width, occasionally a small tree in the wild; young stems clad with short appressed hairs and/or longer more spreading hairs. Leaves mostly lanceolate to narrow-ovate, 4 to 10 in. long, 1 to 4 in. wide, acute or acuminate at the apex, cuneate to rounded at the base, sparsely hairy above, lower surface densely coated with soft, whitish, erect or spreading hairs, the midrib beneath sometimes with longer, brownish hairs, margins edged with forward-pointing or spreading teeth, which are sometimes reduced to threadlike projections; petioles 1 to 4 in. long, with hairs similar to those of the branchlets. Inflorescence a flat-topped or slightly convex cymose corymb up to 10 in. across, borne terminally on the season’s shoots but often supplemented by subsidiary clusters from the uppermost leaf-axils; in­florescence-axes with hairs similar to those of the branchlets. Receptacles of fertile flowers truncate at the apex, enclosing the ovary, usually purplish pink but sometimes uncoloured. Calyx very small. Petals five, coloured like the receptacle, soon falling. Stamens ten, blue. Styles two to four, blue. Ray- flowers variable in number, up to 1 in. across (occasionally wider); sepals mostly four, roundish, toothed or entire, varying in colour from white through pale pink to purple, the veins often more deeply coloured than the rest of the surface. Capsules hemispheric, 1⁄10 to 1⁄8 in. wide. Seeds tailed.

H. aspera was described in 1825 from a specimen collected in Nepal and ranges from there eastward to western and central China and Formosa; it also occurs in Java and Sumatra.

H. aspera varies somewhat in the size, shape, and toothing of its leaves, in the indumentum of the leaf-undersides, branchlets, etc., and in the colour of the flowers, though the variation is not so great as the large number of synonymous names might suggest. Mainly the species is represented in gardens by plants called H. villosa, which derive from seeds collected by Wilson during his two expeditions to western China for the Arnold Arboretum (some, perhaps, from seeds sent later by Forrest from Yunnan). The origin of the plants distributed as H. aspera or H. aspera var. macrophylla is not certain, but these too appear to be Chinese forms of the species.

In its best forms, H. aspera is a very beautiful species and all the more valuable for flowering after midsummer. It is, moreover, one of the few hydrangeas that really thrives in chalky soil; how well it does so is proved by the fine specimen in the chalkpit at Highdown in Sussex, which has produced numerous self-sown seedlings in its time. H. aspera is not, however, an easy plant to suit and is subject to damage by late spring frosts. It is said to succeed best in a dryish soil and should never be planted where the soil lies excessively wet in winter. Like many other hydrangeas, it is tender when young and should be given some protection during its first few winters.

H. aspera varies in its garden characters as well as botanically. Some plants agree with the type of H. villosa in having the ray-flowers bluish purple but they may be pink or white with pink veins There is also variation in flowering time, so that two or three selected plants could provide colour from July until September. A particularly fine form of H. aspera is grown at Westonbirt in Gloucestershire, with bold foliage and flower-heads 10 in. or more across. This clone appears to be sterile and it has been suggested that the original plant might have been a hybrid with H. sargentiana, though there is no sign of the influence of the latter species in the specimen seen. Similar plants are grown under the erroneous names H. aspera macrophylla or H. strigosa macrophylla (see further below under subsp. strigosa). On the other hand, some plants distributed under the name H. aspera are a poor form of the species, and it has been suggested that for this reason it would cause confusion if H. villosa were to be sunk in H. aspera. But this poor form, although still to be seen in collections, is probably not in commerce. Furthermore, the plants raised from the seeds collected by Wilson and grown under the name H. villosa are also very variable in ornamental value.

subsp. strigosa (Rehd.) McClintock H. strigosa Rehd.; H. aspera var. macrophylla Hemsl.; H. strigosa var. macrophylla (Hemsl.) Rehd. – This subspecies differs from the typical subspecies described above only in having the under-surface of the leaves covered with short, stiff, appressed hairs. It was introduced by Wilson when collecting for the Arnold Arboretum, and, from the details given in Plantae Wilsonianae, it would seem that the seeds were collected at a comparatively low altitude, which may explain why some of the plants in cultivation are not very hardy and tend to flower late in the season. One clone that has been distributed commercially develops its inflorescences so late that it has never flowered in Michael Haworth-Booth’s collection, except under glass. In the Gardeners’ Chronicle for October 19, 1935, Besant mentions a plant raised from Wilson 757 that regularly flowered in that month at the Glasnevin Botanic Garden, Dublin, and there is a plant at Rowallane in Northern Ireland which is also October-flowering and certainly belongs to the subsp. strigosa, judging from the specimen in the Wisley herbarium. However, this late flowering is certainly not a character of the subsp. strigosa as a whole. In the Kew Herbarium there are flowering specimens from garden plants taken in almost every month from June to October. A poor form of the subsp. trigosa, distributed under the erroneous name “H. longipes”, flowers in August.

The plant at Wakehurst Place, Sussex, from which a flowering branch is figured in Bot. Mag., t. 9324, was raised originally by H. J. Elwes from a stray in a packet of seeds of Decumaria sinensis, collected by Wilson during his second expedition for the Arnold Arboretum.

The subsp. strigosa is, or was, also in cultivation from Kingdon Ward’s No. 20940. 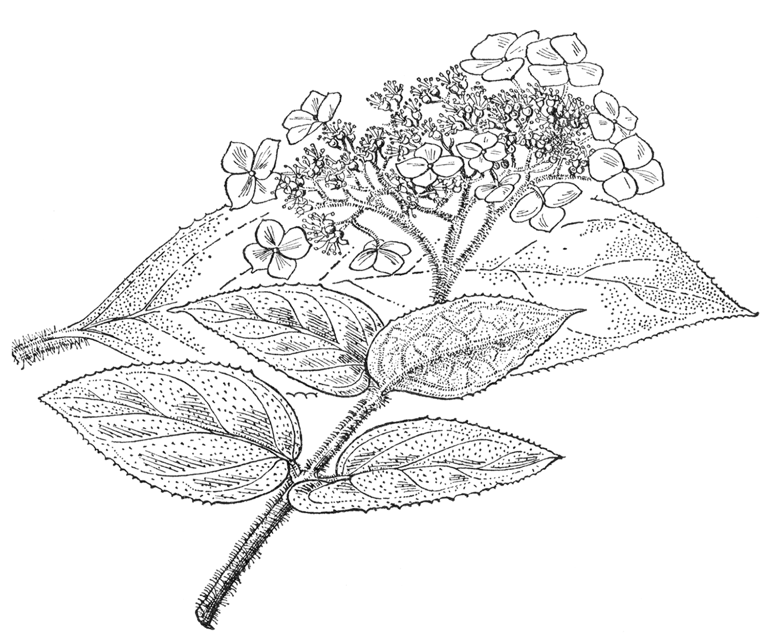 The plants distributed in gardens as H. aspera macrophylla may well be all of one clone, for which ‘Macrophylla’ could be taken as a valid cultivar name, although it is not the H. aspera var. macrophylla of Hemsley. The leaves are notable for their size, being almost as large as those of H. sargentiana. Inflorescence 8 to 10 in. wide; fertile flowers purple, ray-flowers white tinged with lilac. It is very hardy and attains 6 ft or even more in height.