A deciduous climber, reaching in Japan to the tops of trees 60 to 80 ft high, and attaching itself closely to the trunks and limbs by means of aerial roots; young stems glabrous or hairy, older ones with peeling brown bark. Leaves roundish ovate, straight or heart-shaped at the base, and with short, tapered points; regularly, sharply, and finely toothed, 11⁄2 to 41⁄2 in. long, two-thirds to nearly as wide, dark vivid green and glabrous above, paler and often with tufts of down in the vein-axils beneath; stalk varying in length from 1⁄4 to 4 in. Corymbs expanding in June, flat, from 6 to 10 in. across, with large white sterile flowers on the margins, 1 to 13⁄4 in. across, and on stalks 1 to 11⁄2 in. long; the small fertile ones with which the centre is filled being a duller white; stamens fifteen to twenty-two; flower-stalks downy. Bot. Mag., t. 6788.

Native of Japan, Sakhalin, Quelpaert Island (Korea), and Formosa; introduced in 1878. This climber ascends trees, walls, or whatever support it has, in much the same way as ivy does. It grows vigorously, and flowers well on a wall, but a more effective way of growing it is as a bush in the open, for it is very hardy. A few plants may be put round the base of an upturned tree-stump, boulder, or even a mound, which they will soon climb over and cover. After that, the mass assumes a low, spreading, bushlike form, light and elegant in appearance, and very striking when in flower. This hydrangea is in gardens often called “Schizophragma hydrangeoides”, a name that belongs to an allied but quite distinct climber. In place of the three- to six-parted sterile blossom of the present species, the sterile flower of Schizophragma consists of a single ovate sepal, 1 to 11⁄2 in. long. 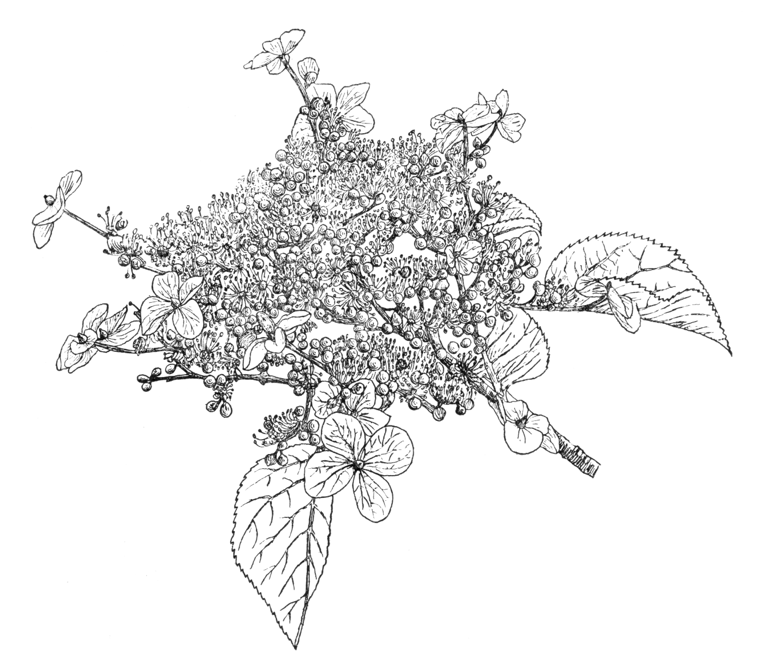