A deciduous tree, ultimately 15 to 20 ft high, with a smooth grey trunk and a much-branched bushy head; sometimes a shrub; young twigs covered with clustered (stellate) hairs. Leaves roundish or very broadly ovate, 2 to 31⁄2 in. long and nearly as wide; margins set with broad open teeth; both surfaces furnished with stellate hairs, the upper one thinly so and finally almost glabrous, the lower one densely on the nerves; stalk 1⁄4 to 1⁄2 in. long. Flowers stalkless, produced from April to July, about twenty together in a shortly stalked globose head about 5⁄8 in. across, the chief feature of which are the numerous yellow stamens. Beneath the head of flowers are four to six conspicuous petal-like bracts of the same shape as the leaves, but only 1⁄2 to 1 in. long, and white; they constitute the chief feature of the inflorescence. Seeds shining, oblong, 1⁄6 in. long. Bot. Mag., t. 7501.

Native of the western Himalaya, especially in Kashmir; where it was discovered by Dr Falconer in 1836. It does not appear to have reached cultivation until 1879, when seeds were sent to Kew. It has no claim to a place among showy plants, but belongs to a family of exceptional interest, and when well furnished with its flower-heads it is at least pretty. The leaves remain long on the tree after those of Parrotia persica have fallen. The largest inflorescences, with the surrounding bracts, are sometimes 2 in. across, especially those that open late. The main crop is borne in April and May, but flowers continue to open intermittently through the summer. The twigs are very rough and are largely used for making rope bridges in the western Himalaya. The wood, too, is useful in being hard and close-grained.

There is an example at Kew near the Pagoda, which is quite hardy and flowers annually. Propagation is by cuttings or layers. 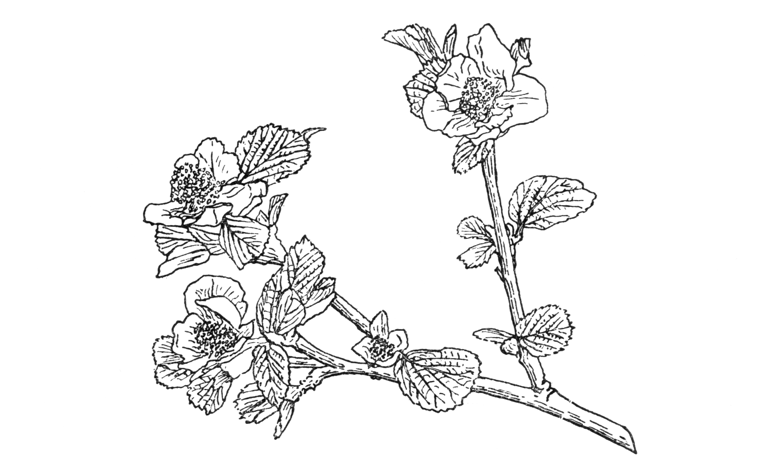