A small tree ultimately 20 to 30 ft high, whose young branches are covered with a close grey down which persists over the first winter. Leaves exceedingly variable in shape, the two extreme types of which are: (1) ovate with a rounded base and pointed apex, 2 to 31⁄2 in. long, 3⁄4 to 11⁄2 in. wide; bluntly, unequally, and rather coarsely toothed; (2) cut back to the midrib into three to seven narrow, linear lobes, which are 3⁄4 to 2 in. long, 1⁄8 to 1⁄4 in. wide, finely toothed (see figure). Between these two forms of leaf, which may occur on the same plant, there are many intermediate ones. For the rest, the leaves are of firm, rather leathery texture, and very downy when young, remaining more or less so until they fall; the pinnatifid form, however, appears to be less downy than the undivided one. Flowers white, 3⁄4 to 1 in. across, produced a few together in small clusters. Fruit like a small ordinary pear.

This extraordinary pear was originally discovered in E. Turkestan by Albert Regel, and was raised and distributed (about 1891) by Dr Dieck of Zoeschen, Germany. The two forms of leaf described above would never be regarded as belonging to the same species, but I have seen both, as well as intermediate ones, on the same plant. 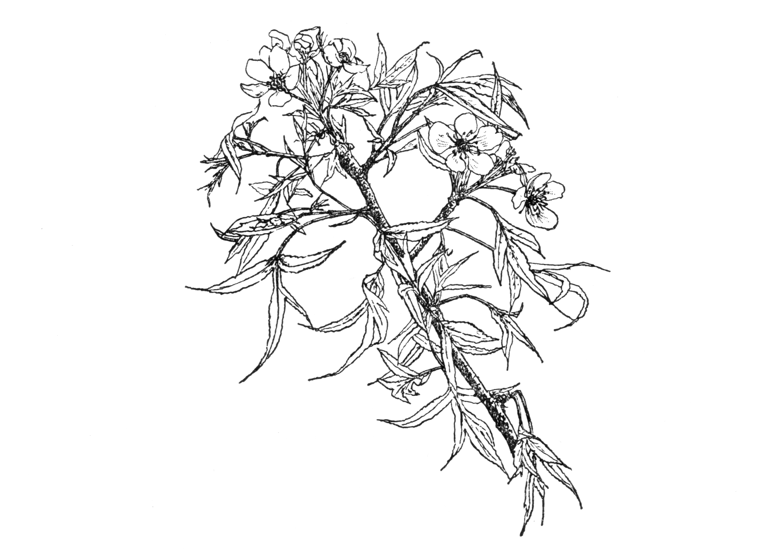