U. campestris L., in part, nom. ambig.; U. montana Stokes in Withering; U. scabra Mill.

A tree from 100 to 125 ft high, with a trunk sometimes 6 ft in diameter; head of branches wide-spreading, rather open; young shoots stout, downy; bud scales hairy. Leaves usually 3 to 7 in. long (sometimes more on young trees) 11⁄2 to 4 in. wide, oval to obovate, slender-pointed, sometimes three-lobed towards the top, very unequal-sided at the base, coarsely and doubly toothed, upper surface dull green, very rough, lower one downy; stalk very short, never more than 1⁄4 in. long, often quite hidden by the rounded basal half of the blade, downy; veins in fourteen to twenty pairs. Flowers in dense, stalkless clusters. Samaras oval, 3⁄4 to 1 in. long, downy only at the slightly notched apex, the seed situated in the middle.

Native of Europe from the mountains of northern Spain to western Russia, north to the British Isles and western Scandinavia, south to the Italian Appenines and southeast Europe. It is rare in the south and east of England, but common in Scotland and Ireland, where it is one of the noblest of native trees. In the open it forms a stout, shortish trunk of great thickness, and a head of branches often pendulous at the ends. It has been confused with some of the hybrids that have arisen between it and U. carpinifolia or related species, but can be distinguished from these and other native British elms by the combination of the short leaf-stalks, the very rough leaves, the absence of corkiness from the two-year old shoots, and by the samaras having the seed in the middle. Moreover, the tree does not produce suckers as U. carpinifolia and U. procera do, and on that account is valued as a stock for other elms.

U. glabra is variable in the shape of its leaves. In what is regarded as the typical subspecies they are roundish or broadly obovate, with a well-developed lobe at the base on the longer side; this is southern in distribution. Trees in northern England, Scotland and most of Scandinavia have narrower leaves and a less developed basal lobe, and have been distinguished as subsp. Montana (Stokes) Lindqvist.

The specific epithet glabra refers to the bark, which is at first downy but remains smooth for many years. It is a pity that such an inept name as U. glabra should have to be used for this species, but it is the earliest one. The U. glabra of Miller is U. carpinifolia.

The names ‘wych’ or ‘witch’, of Anglo-Saxon derivation, were originally applied to other elms also, and to other trees with flexible branches, U. glabra being known as ‘witch hazel’. According to Hegi, the equivalent words ‘wieke’ and ‘wietschke’ are still in use in some parts of Germany. As a result of false etymology the wych elm came to be associated with witches in popular superstition.

f. cornuta (David) Rehd. U. campestris cornuta David; U. tridens Hort.; U. tricuspis Hort. – Leaves with one or two cusp-like lobes on each side of the apex. Such leaves occur fairly frequently on strong shoots. See also U. laciniata below.

cv. ‘Exoniensis’. Exeter Elm. – Branches and branchlets erect. Leaves clustered, dark green, upfolded along the midrib. Although of narrow habit when young it broadens with age. It was found at the Exeter Nursery in 1826 (U. montana var. fastigiata Loud., not U. glabra fastigiata Kirchn.; U. Fordii Hort.; U. exoniensis Hort.).

cv. ‘Horizontalis’ (‘Pendula’). – Like ‘Camperdownii’, this arose as a seedling of procumbent habit, but top-grafted it becomes a flat-topped tree with horizontal or low-arching branches and pendulous branchlets and eventually rises considerably above the point of grafting. It flowers and fruits very freely. It originated in 1816 in a nursery at Perth but was first distributed by Booth of Hamburg, who is said to have bought the entire stock (U. montana var. pendula Loud.; U. horizontalis Hort. ex Loud.; U. montana horizontalis Kirchn.). See also U. ‘Camperdownii’ below.

U. ‘Camperdownii’. – When top-grafted this makes a pendulously branched, small arbour-like tree, with a rounded crown, sinuously branched. It does not grow so tall as U. glabra ‘Horizontalis’. It arose as a seedling at Camperdown House, Dundee, in the first half of the 19th century (U. montana pendula Camperdownii Hort. ex Henry; U. montana pendula Kirchn. sec. Rehd., not Loud.). Although usually placed under U. glabra it shows the influence of U. carpinifolia.

Similar to ‘Camperdownii’, and of the same hybrid parentage, is ‘Serpentina’, which differs in its more contorted branches. According to Henry, it was originally received at Kew under the name U. montana pendula nova, a name said to have been used for ‘Camperdownii’ also.

U. laciniata (Trautv.) Mayr U. montana var. laciniata Trautv. – An ally of U. glabra, widely distributed in N.E. Asia, including Japan. Young branchlets glabrous or slightly downy. Leaves with one or two cusp-like lobes on each side of the apex, though some leaves lack them. Similar leaves sometimes occur in U. glabra, especially on sprouts. 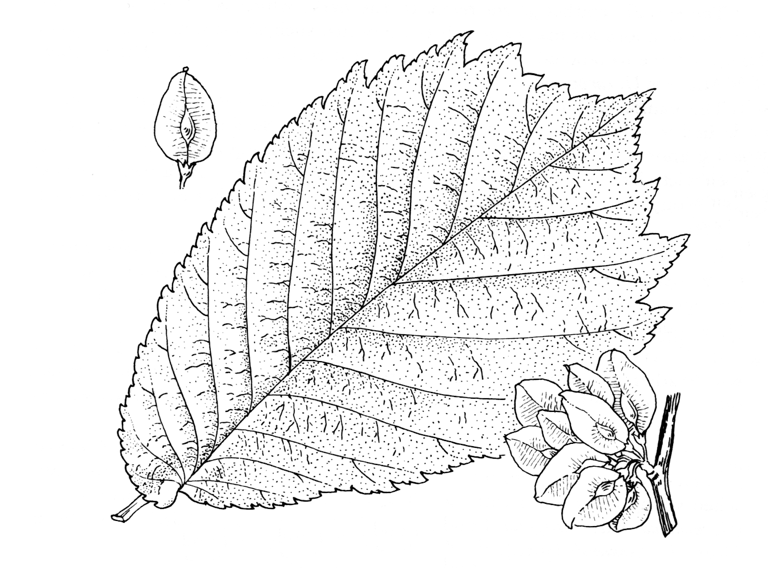