An evergreen tree, described as occasionally over 100 ft high in California; but hitherto a small tree about 30 ft high, or a low, dense bush, in Britain; the young shoots and under-surface of the leaves covered with a beautiful, persistent, golden scurf. Leaves ovate, lanceolate, narrowly ovate or obovate, 11⁄2 to 4 in. long, 1⁄2 to 1 in. wide, tapered at both ends, often long-pointed, not toothed, dark glossy green above; stalk 1⁄4 in. long. Flowers unisexual; the males produced in erect, cylindrical catkins 1 to 11⁄2 in. long, 1⁄4 in. wide; the stamens numerous, yellow, slender. Female flowers produced at the base of the same catkin as the males in two opposite clusters of three to seven flowers, each ovary bearing three styles. Sometimes the female clusters are lacking and the catkins are wholly male. Fruit like that of a sweet chestnut, consisting of a bur 1 to 11⁄2 in. in diameter, clothed with a mass of branched, slender spines, enclosing up to three small, pale brown, shining nuts, which are edible. Bot. Mag., t. 4953.

Native of Oregon and California; introduced in 1844. The above description is based on cultivated English specimens, but in California, where it is sometimes 115 ft high, with a trunk 6 ft in diameter, the leaves are occasionally 6 in. long.

Although so long introduced, there are few large specimens in the country. It is a species that ranges through a variety of climate and habitat and it might well be that if seed were introduced from a number of stands the resulting plants would differ very considerably in their response to the British climate. The largest specimen in the British Isles is probably the one at Leonardslee in Sussex, which was planted in 1908 and measures 53 × 43⁄4 ft (1962). There is a smaller tree, but a fine one, at Grayswood Hill, Surrey. In the Edinburgh Botanic Garden there are two trees which produce self-sown seedlings; one is 28 ft high, the other 20 ft high with a spread of 24 ft (1968).

Probably a deep, light and moist soil is best for this species. The trunk of the tree should not be exposed to full sunlight and its lower branches should not be cut away.

var. minor(Benth.) – A shrub or small tree to about 30 ft, found in the coastal ranges of California. It probably grades into the type; and it may be, as Henry thought, that some of the introductions to Britain belong to this variety.

cv. ‘Obovata’. – This curious dwarf shrubby variety was raised by Messrs T. Smith & Son of Newry, Co. Down, from seeds obtained from N. America about 1914. The leaves are remarkably distinct in shape, being obovate, oval, or almost orbicular, always rounded or even flattish at the apex and only 1⁄2 to 1 in. long. They are yellow beneath when young, as in the type. A plant at Kew bore both male and female flowers in 1928 and developed prickly fruits of the same character as that figured here. It does not appear likely ever to get beyond the dwarf shrubby state. It is no longer in cultivation there. 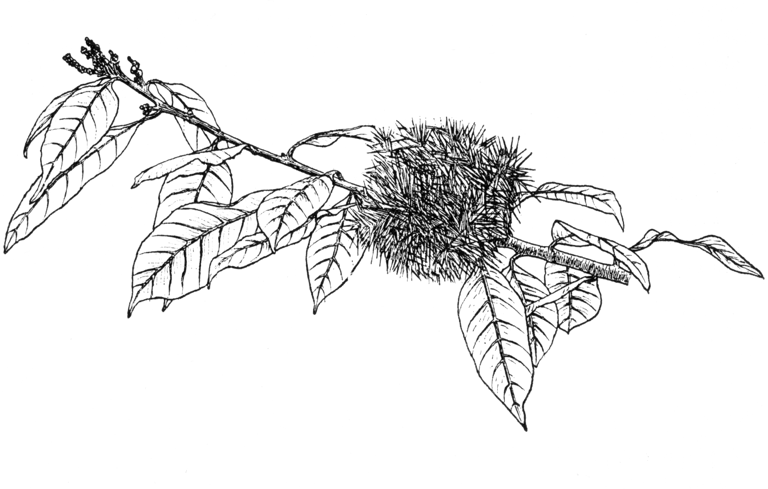