An evergreen climbing shrub up to 20 ft high; young shoots furnished with minute appressed down. Leaves pinnate, 3 to 6 in. long, made up of from thirteen to twenty-five leaflets which are oblong, tapered at the base, rounded at the end; margins not toothed but slightly recurved; 1⁄2 to 11⁄4 in. long, 1⁄8 to 5⁄16 in. wide, dark green above, paler and furnished with minute appressed down beneath; scarcely stalked. Racemes pendulous, produced from the leaf-axils during the early summer months and carrying a number of flowers crowded at the end, the main-stalk being slender, zigzag, minutely downy and furnished with linear bracts 1⁄8 in. long. Flowers constructed like those of the pea, the chief parts being the standard and keel petals, which are twice as long and several times larger than the wing petals. The standard petal is erect, bent back, 11⁄2 to 2 in. long, slender-pointed; the keel is canoe-shaped and 2 to 21⁄2 in. long; the whole of a brilliant red. Calyx bell-shaped with sharp teeth, downy, 1⁄2 in. wide. Pod 3 in. long, 1⁄2 in. wide. Bot. Mag., t. 3584.

Native of New Zealand; introduced in 1831. This beautiful climber, attractive in its brilliantly coloured, curiously shaped flowers, and for its luxuriant and graceful foliage, is well suited for growing on walls in the milder parts of the kingdom, furnishing them with an admirable evergreen covering up to 8, 10, or even 12 ft high, and more in width. At Kew, although it survives soft winters, its tenure is uncertain and it is only really happy under glass. The plant loves an open, well-drained, sandy soil. Even in mild gardens it is rather short lived.

f. albus Hort. – Flowers white. Such forms have been observed in the wild and are said to come true from seed. The cultivated plants are usually not so free-flowering and never so handsome as the red-blossomed type.

var. maximus (Col.) Kirk C. maximus Col.; var. magnificus Hort. – A larger plant, growing to 10 ft or more; leaflets longer than in the type; flowers darker, often with a dark blotch near the base. Found wild in the North Island from East Cape southward (Allan, Flora of New Zealand, 1961).

A spray with rose-coloured flowers was exhibited at Vincent Square by Lt-Col. E. W. Bolitho on 30th April 1940. 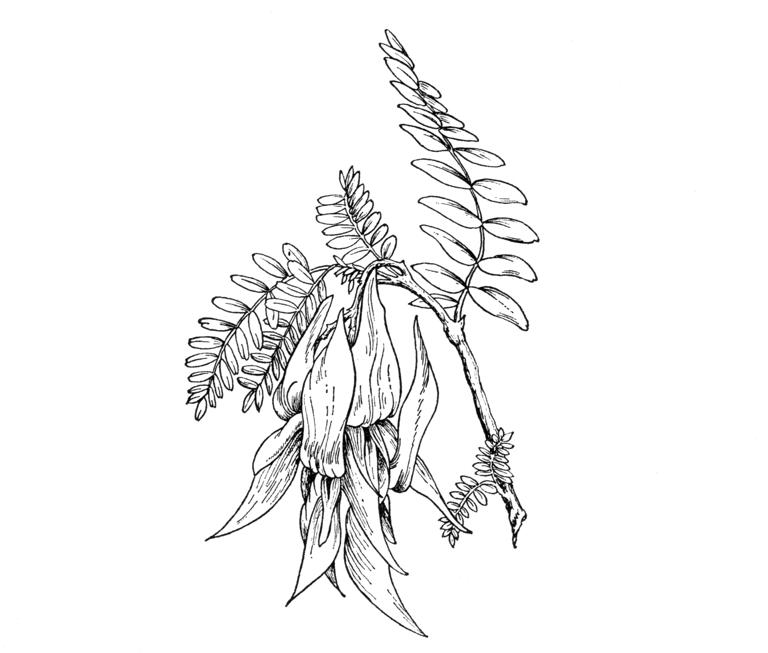