A tree 80 ft high, of pyramidal habit; young shoots glabrous, viscid, angled; winter buds stalked. Leaves roundish to broadly ovate, usually deeply notched at the base, shortly and abruptly pointed or rounded at the apex, 11⁄2 to 4 in. long, from three-fourths to as much wide; finely and simply toothed; upper surface glabrous, dark lustrous green; lower one paler and also glabrous, except for tufts of brownish down in the vein-axils; leaf-stalk slender, 1⁄2 to 11⁄2 in. long, glabrous. Male catkins three to six, in a terminal zigzag raceme, each catkin 2 to 3 in. long, expanding in March. Fruit erect, egg-shaped, 1 to 11⁄4 in. long and 5⁄8 to 3⁄4 in. wide, mostly in threes. Bot. Mag., t. 8658.

Native of Corsica and S. Italy; said to have been introduced in 1820. Undoubtedly one of the handsomest of the alders, this tree is not planted enough. Although it thrives on poor and dryish soil, and even on chalk, it is more at home near water. Its deeply heart-shaped, glistening leaves and large fruits (larger than those of any other species in cultivation) make it very distinct. From A. subcordata it is distinguished by its shorter male catkins, and by several other points mentioned under that species.

A fine pyramidal tree on the banks of the pond at Kew died in 1959, after attaining a height of about 70 ft. The tallest recorded in England grows at Westonbirt, Glos., and measured 90 × 8 ft in 1963, but this is almost equalled in height by a tree at Smeaton Hepburn, E. Lothian. There are several good specimens in Battersea Park, London. 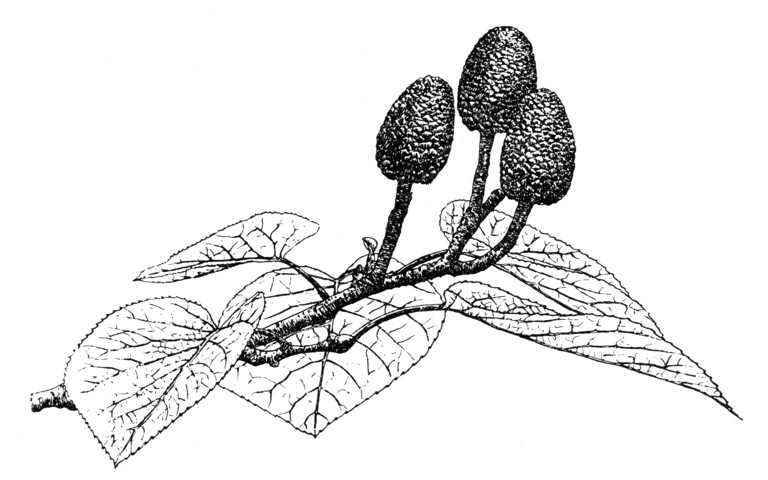