A tree 50 to 90 ft high, with a rough brown bark, often flat-topped and with wide-spreading branches; young shoots densely leafy, glabrous, brown; terminal buds cylindrical, pointed, 1⁄2 to 1 in. long, coated with resin. Leaves in pairs, falling the third or fourth year, rigid, 3 to 5 (sometimes 7) in. long, semi-terete, dark green; leaf-sheath persistent, 1⁄2 to 5⁄8 in. long. Cones obliquely egg-shaped, 21⁄2 to 31⁄2 in. long, the boss on the scales terminated by a stiff, slightly hooked spine.

Native of California; originally discovered in 1832 at San Luis Obispo, from which it gets its popular name; introduced by Hartweg in 1846. This remarkable pine bears its cones in whorls of three to seven; they are deflexed, and the inner or less exposed side being less developed gives them their unsymmetrical shape. They remain on the tree and retain their seed for an indefinite period, at least twenty-five to thirty years, and often until the branch bearing them is 5 or 6 in. in diameter. This enables the species to survive forest fires, which, although they destroy the old trees, only affect the cones sufficiently to expand the scales and allow the uninjured seed to escape. The tree grows on exposed bluffs and headlands in Monterey and other places along the coast of California, where it is at times drenched with ocean spray. I have a letter from a correspondent in Guernsey, who says that it withstands the salt winds of that island even better than P. radiata. In such places it will be chiefly valuable as a shelter tree, its timber being inferior; but it is also handsome, and worth growing for its interest. Among two-leaved pines with persistent leaf-sheaths this is distinguished by its cylindrical, resin-covered buds and long, deep green leaves.

In addition to the common broad-crowned type with dark yellowish-green needles, there is another form, deriving from the northernmost wild stands, with a narrower crown and needles of a bluish shade of green. This type is represented by two trees at Wakehurst Place in Sussex, the larger 71 × 81⁄2 ft (1964). It was planted in 1917 (Mitchell, Conif. Brit. Isles (1972) p. 221). 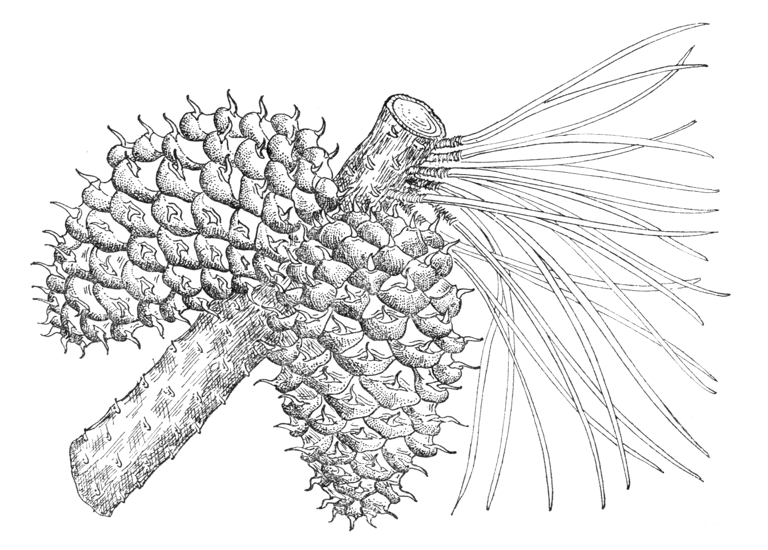 Graham Thomas tells us that seed of P. muricata given to the National Trust by the Rosewarne Experimental Station has produced trees that seem to be hybrids between that species and P. radiata. Such hybrids have been noted in New Zealand and other countries, and may occur naturally where the two species overlap on the Monterey peninsula in California.

Although less commonly planted for the purpose than P. radiata, this species is probably as good, and perhaps better, as a windbreak in western maritime districts. But it is of wider distribution, and might vary in suitability according to provenance.