A tree with a short trunk and a low, spreading, rounded head of branches, considerably more in diameter than it is in height, or a large shrub; bark smooth; winter buds resinous. Leaves among the smallest in the genus, consisting usually of five (sometimes seven) narrowly oblong or oval, pointed, shallowly round-toothed, stalked leaflets, 2 to 4 in. long, downy when quite young, of a pale greyish green. Flowers fragrant, borne in dense, erect, cylindrical, downy panicles up to 6 or 8 in. long and 2 to 3 in. wide, white or faintly tinged with rose, the stamens protruding 1⁄2 in. beyond the petals. Fruit somewhat fig-shaped, swollen on one side, 2 to 3 in. long, ending in a point, the surface rough but not spiny. Bot. Mag., t. 5077.

Native of California, where it is occasionally found from 30 to 40 ft high, but more often as a bush 10 to 15 ft high. It is perfectly hardy as a small tree at Kew, and thrives admirably there. The tree is very distinct on account of its habit, and its abundant foliage with a rather metallic hue. It flowers from June to August, and often shows the curious habit of developing a single flower at the top of the panicle first, which has formed a small fruit whilst the flowers immediately below it are still in bud. Introduced by W. Lobb about 1850, it first flowered in Messrs Veitch’s Exeter nursery in 1858. There is an example at Kew by the Economic House; when it bears a full crop of flowers (and it does not do so every year) it is very striking owing to the contrast between the pure white or light rose panicles and the deep green foliage. 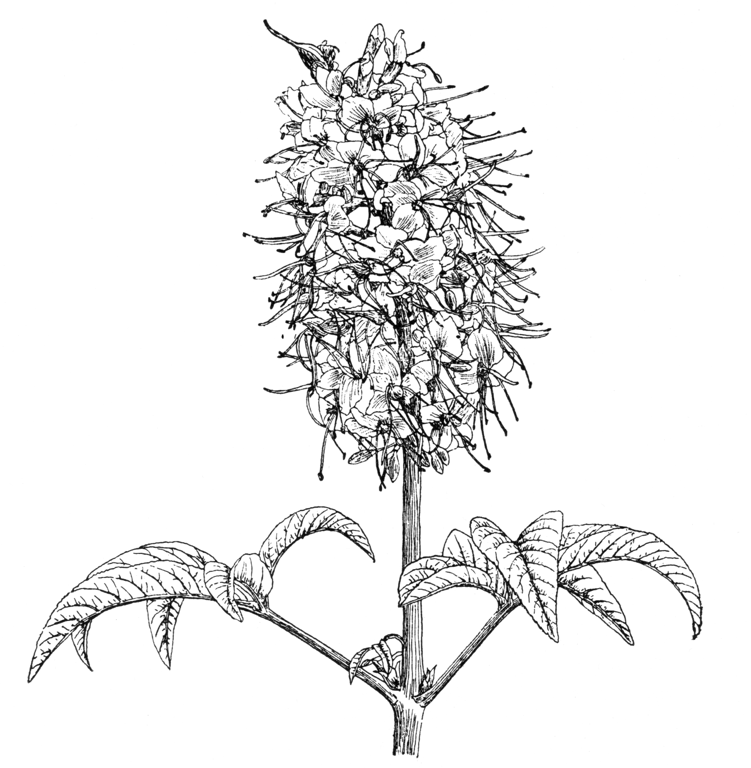