A tree attaining a height of over 100 ft in N. India, often with a short, enormously thick trunk, the bark in old specimens peeling off in long strips; winter buds resinous. Leaves composed of usually seven leaflets, which are glabrous on both surfaces, shining dark green above; obovate to lanceolate, the central ones much the largest, sometimes 12 in. long, and 4 in. wide; toothed. Panicles erect, cylindrical, up to 12 or even 16 in. long, and 4 or 5 in. wide. Flowers 1 in. long, white; petals four, the upper and longer pair with a blotch of yellow and red at the base, the shorter pair flushed with pale rose; stamens standing out 3⁄4 in. beyond the petals. Fruit rough, but not spiny, 2 to 3 in. long. Bot. Mag., t. 5117.

Native of the N.W. Himalaya. One of the most magnificent of all temperate trees, and equalling the common horse-chestnut in beauty, it is remarkable that this species is still so little known in English gardens and parks. Although the young growths may be cut by late frosts in low-lying districts, it is quite winter-hardy and grows well in any good garden soil, including chalky ones. It does, however, appreciate generous moisture at the root, and will be slow to get away if planted in a dryish soil and exposed to full sun. At Kew there are two trees by the restaurant, planted 1888, the taller 50 × 71⁄4 ft (1966); they have fruited for many decades past and one of their seedlings, growing on chalk at Highdown near Worthing, is 40 ft high and in turn fruits well. Some good trees on record are: Wakehurst Place, Sussex, 56 × 71⁄4 ft (1966); Westonbirt, Glos., 51 × 43⁄4 ft (1964); Tortworth, Glos., pl. 1890, 59 × 61⁄4 and 52 × 61⁄4 ft (1964). At Glendoick in E. Perthshire, there are two trees, about thirty-five years old, growing in ‘a very cold and windy situation, which are about 28 ft high’ (E. H. M. and P. Cox, Modern Trees, 1961).

A. indica was introduced in 1851 by Colonel Henry Bunbury and a seedling planted by his relative Sir Charles Bunbury at Barton in Suffolk had attained a height of 66 ft by 1904. Another plant there is known to have flowered in 1858, when only seven years old.

This chestnut flowers in June and July, and is, therefore, at least one month later than the common one – a great point in its favour. The unfolding leaves, too, are attractively tinted. It is best propagated from seed, which, however, quickly loses its vitality and, if not sown at once, should be over-wintered in moist soil or peat.

cv. ‘Sydney Pearce’. – A selected form, very free-flowering, with flowers more richly coloured than in the common run of seedlings and arranged in a denser spike. The parent tree grows at Kew, where it was planted around 1935. Scions have been distributed, but it will be many years before it is freely available. It was given an Award of Merit in 1967 (Journ. R.H.S., Vol. 93, April 1968, pp. 182-3 fig. 74). 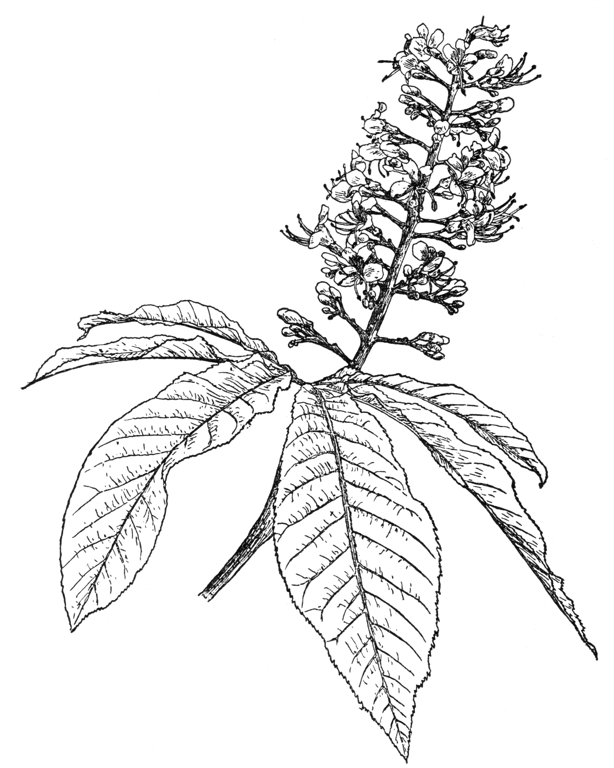 Those lucky enough to obtain grafts of this cultivar should bear in mind that its outstanding features are not only the length and deep colouring of the panicles but, perhaps even more, the freedom with which they are borne on an unusually dense and symmetrical crown. The original tree grows facing the Main Gate at Kew in an open, well-lit position; its progeny, if not given a similar situation, might not be nearly so striking.

† A. assamica Griff. A. punduana in Wallich Catalogue, nom. inedit. – This eastern relative of A. indica ranges from Sikkim through Assam and the Naga hills to Burma and Thailand. In foliage it differs from it in the more leathery texture of the leaves and the more shortly stalked, sometimes almost sessile, leaflets, which are rather obscurely toothed (finely serrated in A. indica). As to the flowers, Hardin takes as a key difference that in A. assamica the upper petals are oblong and 3⁄8 to 7⁄8 in. long, against oblanceolate and 5⁄8 to 1 in. long in A. indica. Also, the markings of the flowers are usually yellow (which is sometimes the case in A. indica).

Three trees in the Aesculus collection at Kew appear to belong to this species. They came from the Lloyd Botanic Garden, Darjeeling, in 1924. One, near the Restaurant, measures 46 × 31⁄2 ft at 3 ft (1980).