A wide-spreading, deciduous tree reaching 100 ft in height in the wild; buds with linear stipules; young branches downy. Leaves narrowly oval or oblong, tapered at both ends, margined with coarse, triangular teeth, each terminated by a small, slender, abrupt mucro, 3 to 71⁄2 in. long, 11⁄4 to 3 in. wide, dark glossy green above and glabrous except when quite young, underside dull greyish and clothed with minute down, occasionally almost glabrous; stalk 1⁄2 to 1 in. long, downy. The larger leaves have ten to twelve pairs of parallel veins, prominent beneath, which run out and furnish the short mucronate tip of the tooth. Fruits solitary or in pairs (occasionally up to five) on a short, stout, downy peduncle, ripening the second year. Acorns 3⁄4 to 11⁄4 in. long, flattened at the top, and half enclosed in a cup with reflexed downy scales.

Q. afares Pomel Q. castaneifolia of some authors, in part, not C. A. Meyer; Q. castaneaefolia var. incana Batt. & Trabut; Q. castaneaefolia var. algeriensis Bean – This species is so closely allied to Q. castaneifolia that some botanists have not recognised it even as a variety. Chiefly it differs in its flowers and fruits, notably in the female flowers having four or five slender spreading styles (only three, shorter and more erect, in Q. castaneifolia); in the shallower acorn-cup with longer, more slender scales; and in the more clustered and often more numerous fruits. There seems to be no reliable difference in the leaves, but the young stems are more densely downy and the bark is more deeply furrowed.

Q. afares is a native of Algeria, where it forms forests in the coastal mountains from Algiers eastward and is also found in bordering parts of Tunisia. In its native habitat it attains a height of 75 ft. It is rare in cultivation and less vigorous than Q. castaneifolia, judging from the trees at Kew. Of these there are two, raised from seeds sent from Algeria in 1869, of which the larger measures 71 × 81⁄4 ft (1972). The leaves of these trees are smaller than in Q. castaneifolia, the largest being 4 to 5 in. by 13⁄4 in. 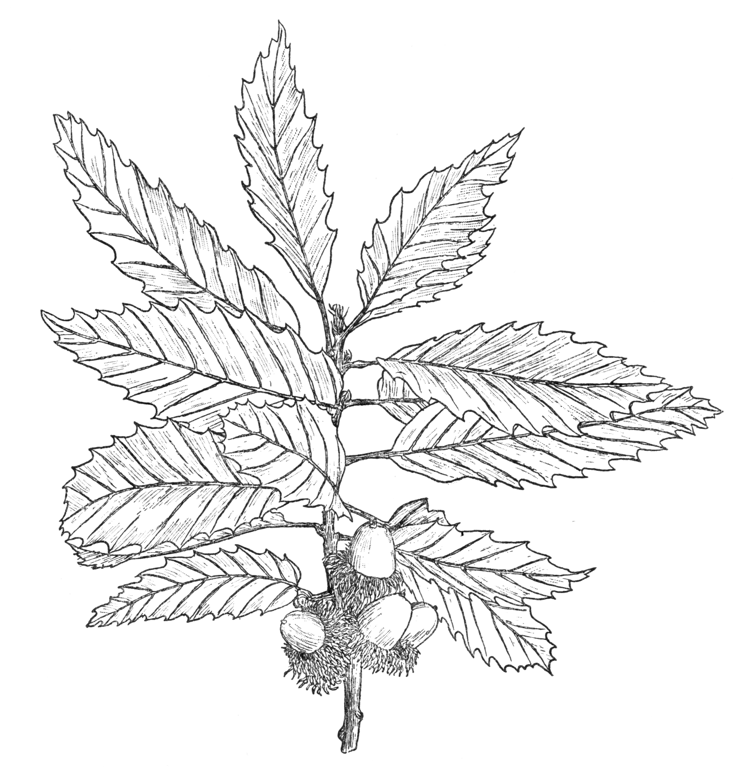 Q. castaneifolia was reintroduced to Kew by Fliegner and Simmons in 1977 from the Elburz mountains of Iran.