An evergreen shrub up to 10 or 12 ft high, of sturdy, dense, neat habit, sometimes a small tree up to 15 or 20 ft high; buds glabrous or soon becoming so; young shoots at first clad with starry down, soon glabrous. Leaves stiff and hard, broadly oval, oblong, or ovate, rounded or heart-shaped at the base, ending in a stiff, sharp spine similar to the three to five with which each margin is armed, 1⁄2 to 11⁄2 in. long, half to three-quarters as wide, dark green above, slightly paler below, shining and glabrous on both sides; stalk about 1⁄8 in. long, slightly downy at first, soon glabrous. Fruits ripening the second year, usually solitary on a short stalk about 1⁄2 in. long; acorn 1⁄2 to 1 in. or slightly more long, one-half to two-thirds enclosed in the cup, which is covered with spreading, spiny scales.

Native of the western Mediterranean (including N. Africa), giving way east­ward to Q. calliprinos; also of Portugal and Atlantic Morocco; cultivated in Britain since the 17th century. Of the dwarf evergreen oaks, this is perhaps the most pleasing in the glitter of its foliage and neat bushy habit. It is as prickly-leaved and well armed as a small-leaved holly. It is variable in foliage.

Q. coccifera has reached 20 ft in height in the Heath Garden at Wakehurst Place in Sussex. At the other extreme Mr Hillier has a very dwarf and compact plant at Jermyns House, Ampfield.

Q. coccifera obtains its popular name of ‘Kermes oak’ from being the host plant on which the kermes insect (Chermes ilicis) breeds. This insect, after certain treatment, produces a beautiful scarlet dye remarkable for its richness and lasting quality, once much employed and known in commerce as ‘grain’ or ‘scarlet grain’, but now, owing to cheaper substitutes, fallen into disuse. Three sprigs of Q. coccifera or ‘grain tree’ still form the crest of the Dyers’ Company, whose arms were granted to them between 1420 and 1450. From this one may gather how high was the estimation in which ‘Kermes’ was held in the Middle Ages; but so much has this dye disappeared from modern use that until the matter was investigated at Kew, the Company itself did not know to what tree the sprigs were supposed to belong. For an interesting account of this oak in regard to its connection with the dye, and various allusions to the latter quoted from Chaucer and Shakespeare, see Kew Bulletin (1910), p. 167.

Q. × auzendi Gren. & Godr. (“auzendri”). – A hybrid between Q. coccifera and Q. ilex, found wild in S. France, etc. Its leaves resemble those of Q. coccifera but are more or less felted beneath; the fruits are more like those of the other parent in having appressed scales; they are borne two or three together on a stalk up to 1 in. long. It used to be cultivated in the Heatherside Nursery near Bagshot. 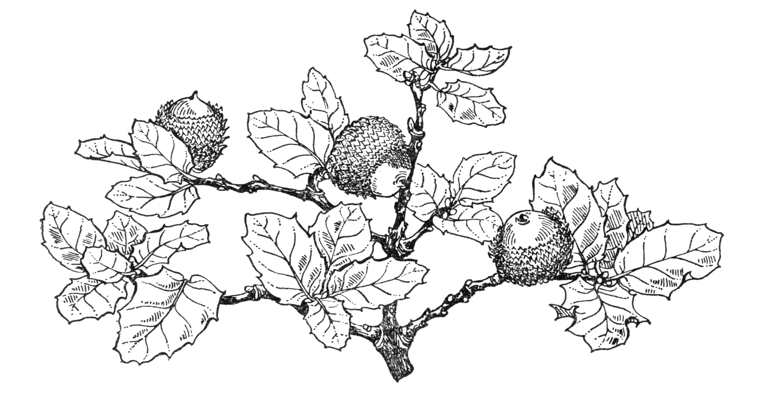 † Q. aucheri Jaubert & Spach – Near to Q. coccifera, and not recognised as distinct from it by all authorities, this differs chiefly in having the leaves densely tomentose beneath. It is confined to south-west Anatolia and some neighbouring islands; described in 1843 from a specimen collected on the Greek island of Cos (Davis (ed.), Fl. Turkey, Vol. 7, p. 681).