An evergreen or sub-evergreen tree attaining a height of 100 ft in favourable situations and a girth of 18 ft, but sometimes a shrub; young shoots furnished with soft, rust-coloured down. Leaves leathery, oval or oblong, usually rounded at the apex and more or less heart-shaped at the base; on young trees they are spiny-toothed at the margins but on old ones become entire, 2 to 4 in. long, two-thirds as much wide; dark green above and soon glabrous except on the midrib, paler and coveted with fawn-coloured down beneath; veins eight to twelve each side the midrib, forking before they reach the margin; stalk 1⁄12 to 1⁄8 in long. Leaves on water-shoots quite glabrous beneath. Fruits solitary or in pairs on a short downy stalk; acorn globose to egg-shaped, 1⁄2 to 1 in. wide, the base enclosed in a thin, shallow cup with triangular, erect, ciliate scales. The fruits take fifteen months to reach maturity.

Q. semecarpifolia has a wide distribution, ranging from eastern Afghanistan through the Himalaya to W. China. Although described by Sir James Smith in 1819, it was probably not introduced until 1900. In that year J. S. Gamble of East Liss, Hants, received acorns from Chakatra in the N.W. Himalaya, from which two seedlings were raised which by 1909 were 10 and 15 ft high respectively (Journ. R.H.S., Vol. 40 (1914), p. 78). Of these one still exists in a garden on the Highfield Estate and measures 47 × 51⁄2 ft (1972). At Tregrehan in Cornwall there are two trees which are possibly older than the East Liss specimen; their measurements are 52 × 5 ft and 56 × 63⁄4 ft (1971).

In the Himalaya Q. semecarpifolia is a gregarious tree, often dominating on north-facing slopes, and ascending to 12,000 ft. In W. Szechwan, on the uplands near Kangting (Tatsien-lu), it is a thicket-forming shrub, ascending to the upper limits of woody vegetation and often associated with Juniperus squamata and certain small-leaved species of rhododendron (Pl. Wils., Vol. III, p. 221). 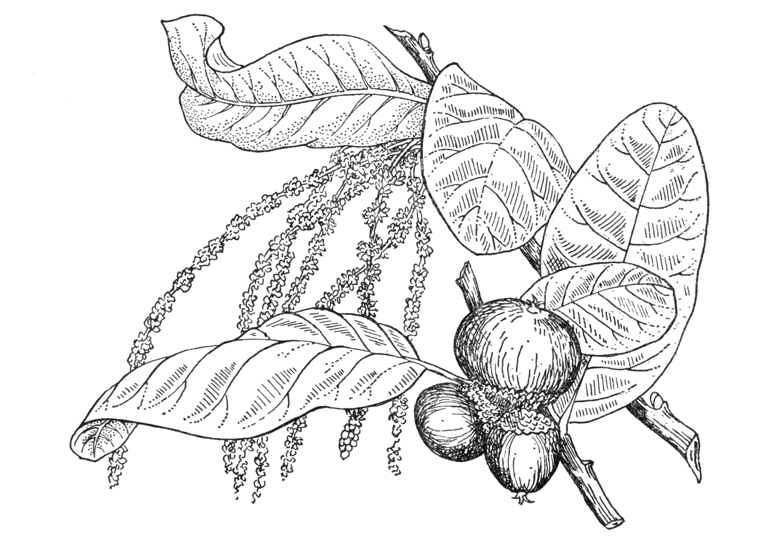 The specific epithet, often mis-spelt ‘semicarpifolia’, means ‘resembling the leaves of Semecarpus’. S. anacardium has fleshy fruits that yield a juice used as marking-ink and for decorating cloth (Greek ‘semeion’, a mark).