A deciduous tree sometimes 30 to 35 ft high, the branchlets glabrous, red when young and becoming brown marked with longitudinal whitish stripes. Leaves reddish when young, three-lobed, 3 to 5 in. long, about three-fourths as wide, glabrous, doubly toothed, the terminal lobe triangular and larger than the side ones, but sometimes the sinuses are so shallow that the leaves are virtually unlobed and kite-shaped; veins and stalk usually red. Flowers greenish white, in drooping slender racemes 21⁄2 to 4 in. long. Fruits glabrous, numerous, in drooping racemes; keys 1⁄2 to 3⁄4 in. long; wings rounded at the end, 1⁄5 in. wide, spreading at an angle of 120° or almost horizontally.

Native of Japan, introduced to cultivation by Prof. Sargent, who found fruiting trees in Japan in October 1892, and sent young trees to Kew a year or two later. It has proved hardy. It is one of the handsome group with striated branches including A. pensylvanicum and A. rufinerve, to both of which it is closely allied and bears much resemblance in shape of leaf, but is readily distinguished by the absence of rusty down from the undersides of the young leaves. The usually red petioles and the relatively long central lobe, extending about half-way towards the base of the leaf, also serve to distinguish it. In A. rufinerve, the side lobes arise nearer to the tip of the leaf, and the central lobe is rather short and stubby; also its young stems are distinctly glaucous. There is a fine specimen in the Winkworth Arboretum, Surrey. 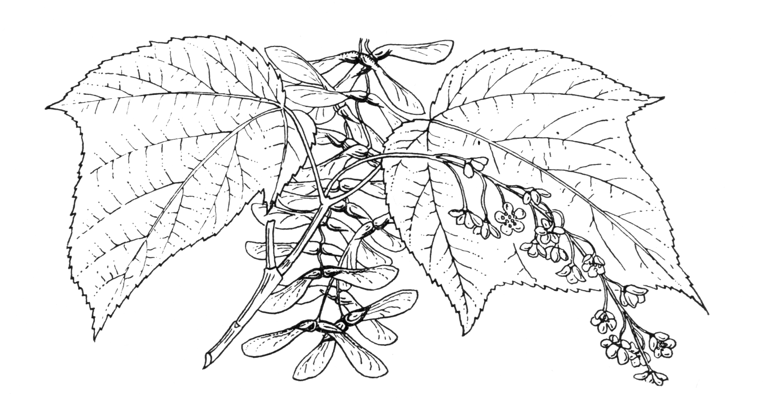 This species is portrayed in Bot. Mag., n.s., t.777, from a tree at Kew raised from seed received from K. Wada in 1933. The examples listed below are unlikely to be older than this, since A. capillipes is not a long-lived species. One reason for this, which applies to all the snake-barks and perhaps especially to this one, is that the bark remains thin even at the base of the trunk. At Borde Hill a whole group of such trees, about thirty years old, was damaged beyond repair by gnawing of the bark – hares being the probable culprit in this instance. Susceptibility to honey fungus may be another cause of sudden death.