A deciduous tree up to 40 ft or more high in a wild state; young shoots purplish or red, glabrous. Leaves mostly three- (sometimes five-) lobed, slender-pointed, more or less heart-shaped at the base, finely toothed; side lobes triangular, divergent, sometimes much reduced on flowering shoots; 2 to 41⁄2 in. long, 1 to 3 in. wide; smooth on both surfaces except for axil-tufts of down beneath; stalk 1 to 21⁄2 in. long; chief veins webbed at the base. Flowers brownish green, produced with the leaves in May on slender racemes up to 4 in. long. Fruits glabrous, the wings 1⁄4 in. wide, spreading almost horizontally and giving the whole fruit (with the nutlets) a spread of 11⁄2 to 2 in.

Native of China; discovered by Forrest on the eastern flank of the Lichiang range in 1906 and introduced by him in the same year. Rehder and Wilson, in Plantae Wilsonianae, Vol. 3, p. 426, made A. forrestii a synonym of A. laxiflorum, but later Rehder withdrew this judgement and treated the two species as distinct in Journ. Arn. Arb., Vol. 14, pp. 211-22, as does Fang in his monograph on the Chinese maples. The key character by which A. forrestii may be distinguished from laxiflorum is that the leaves are glaucescent beneath and, except for tufts of down in the axillary pockets, glabrous; in the latter they are green beneath and downy on the veins, at least when young. There seems to be no other reliable character by which they may be distinguished and indeed the material in the Kew Herbarium suggests that the difference between them is slight.

A. forrestii is uncommon in cultivation. The largest specimens recorded are at Caerhays Castle, Cornwall, where there is one of 38 × 21⁄4 ft, dividing at 31⁄2 ft, raised from Forrest 30631, and another 36 × 31⁄4 ft at 2 ft, from Forrest 28395 (both measured 1966). There is a smaller plant at Westonbirt in Mitchell Drive and others in Silkwood. A. forrestii is a handsome species with the characteristic snake-bark of its group; the branching is sparse but very graceful and the beautifully formed leaves, borne on red petioles, are of a rich green and held long into the autumn. It is rather tender when young.

A. wardii W. W. Sm. – A native of Upper Burma and neighbouring parts of Yunnan and Tibet; discovered by Kingdon Ward in 1914; introduced by Forrest. It is a tender and little-known maple, more at home in section Macrantha with the snake-bark maples than near A. sinense, which Sir William Wright-Smith suggested as its nearest ally. The fine specimen at Trewithen, Cornwall, died recently from the effects of the 1962-3 winter but we are told by Mrs Johnstone that one cutting from it was struck. 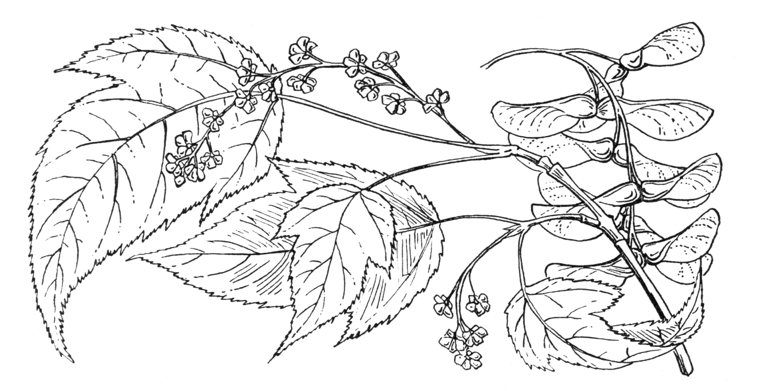 A. wardii – In his classification of the genus, de Jong places this species in a monotypic series of the section Macrantha.